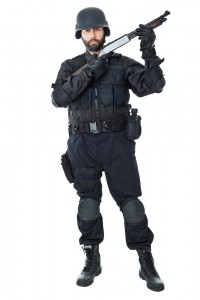 Today the National Rifle Association held its first press conference since the tragic shooting in Newtown, CT in Washington, DC. At the conference, Executive Vice President of the NRA, Wayne LaPierre, called for armed police officers in every school in the United States and creation of a national database to track those with mental illness and spoke of a new program that will draft security plans for school featuring armed security.

Eleanor Smeal, President of the Feminist Majority Foundation, said “There is a massive gender gap in gun violence. Women are simply sick and tired of it, and the NRA is doubling down on their extremism.”

LaPierre addressed [PDF] a room filled with reporters, “The truth is that our society is populated by an unknown number of genuine monsters – people so deranged, so evil, so possessed by voices and driven by demons that no sane person can possibly ever comprehend them. They walk among us every day.”

He continued “And does anybody really believe that the next Adam Lanza isn’t planning his attack on a school he’s already identified at this very moment? How many more copycats are waiting in the wings for their moment of fame … A dozen more killers? A hundred? More? How can we possibly even guess how many, given our nation’s refusal to create an active national database of the mentally ill?”

A SWAT Agent from Shutterstock