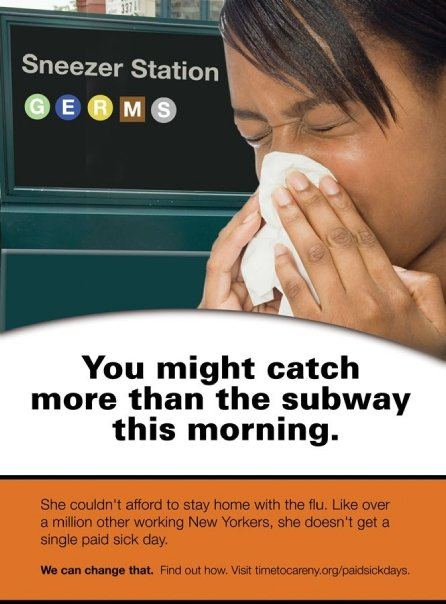 Christine Quinn is the first female and openly gay New York City Council Speaker.   By speaking out and standing up for the rights of women and queer folks throughout the city, she has received a lot of support from the feminist community as Speaker and as potential NYC mayor.  But on a new issue facing workers in her city, Quinn is standing in the way of progress. She is refusing to bring a bill to the City Council floor that would require paid sick leave for most employees in her city.

If you are privileged enough to have paid sick leave at your job (though it’s terrible that we have to think of paid sick leave as a privilege), you probably don’t have to worry that the sniffle you just got might mean you can’t pay your rent this month, or that your son getting sick could very well lead to losing your job.

More than 40 million American workers get no paid sick leave.

In over 145 countries, paid sick leave is required under national law. In the U.S., it goes city by city (and occasionally, by state), with existing paid sick leave laws in Washington D.C., San Francisco, Seattle, and the state of Connecticut.

This is a labor rights issue and a public health issue. We need a national law requiring businesses to provide paid sick leave, but until then, the New York City council is aiming to get a proposal passed that would require paid sick leave for 1 million workers that currently do not have this benefit.

The Paid Sick Time Act would require businesses with 5-19 employees to provide them with 5 paid sick days a year, days that can also be used to care for sick children; businesses with 20 or more would provide 9 paid days. 37 out of 51 city council members support the bill – more than enough to pass it over Mayor Bloomberg’s veto. And yet Christine Quinn is standing in the way of its passage by arguing that it will have a negative effect on business profits. Quinn is dead wrong – extensive research shows that paid sick leave does not negatively effect business profits.

Paid sick days are a basic security that should be available to EVERYONE. Workers deserve to know that being sick won’t mean they can’t pay their bills, afford food, or even lose their jobs. Nearly 1 in 4 workers reports that they have lost a job or were told that they would lose their job if they took time off for a personal or family illness. Getting sick is not something anyone can easily avoid, and with such high health care costs, many workers will go to work and suffer rather than lose their wages. 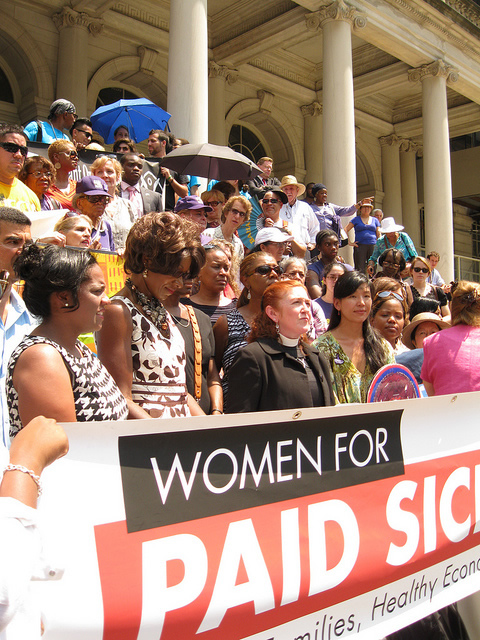 Most of those who lack paid sick days are low wage workers, and most of them are women.  Nearly 4 in 10 working women do not have access to paid sick days, and women-dominated industries are the least likely to have paid sick leave – for example, 72% of childcare workers and 73% of food service workers lack paid sick time. In a culture where women are most often bearing the brunt of childcare, women are often responsible for staying home from work to care for a sick child.  A Kaiser Foundation report shows that around half of all mothers must take work off when their child is sick, and of these, half lose pay when they take time off to care for their child. Among low-wage mothers, 2 in 3 report losing pay. For women of color and LGBT families, a lack of paid sick leave can also be a major barrier to workplace and economic equality.

Christine Quinn is someone who, for many women, represents a feminist dream as the potential first female and first openly gay mayor of New York. Gloria Steinem has been a prominent supporter of Quinn, but recently she has been voicing her disapproval of Quinn blocking this bill.  Steinem, along with 200 other prominent women leaders, is waging a campaign to pressure Quinn to bring the measure up for a vote.  Calling Quinn out for caring more about the interests of the business community and Mayor Michael Bloomberg, the group held a rally outside of City Hall two weeks ago. Maria Castaneda, Secretary-Treasurer of 1199 SEIU-UHE, said during the rally that “Nearly 1 million New Yorkers don’t get paid sick days—most are women working in low-wage service jobs like waitresses, retail clerks, day care providers and home care workers.”

The coalition of women made it clear to Quinn that she needs their votes in order to win a mayoral election, and that, although she stands with women on a lot of other issues, that this will not stand.  Women should not have to choose between keeping their job and caring for themselves or a sick family member.

Unfortunately, it can be easy at times as feminists to get so focused on which politicians support a women’s right to contraception and abortion, and we forget that labor policies, a less overtly feminist issue but a clear feminist position nonetheless, matter to women. These amazing women are making it clear to Quinn and other politicians who are relying on “the women’s vote” to get elected that worker’s rights are women’s rights, and that despite women’s various levels of socioeconomic status, true feminists stand up for the rights of working class women – because without it, we don’t have a chance.