The speeches by pro-suffrage Senators today were as eloquent and impassioned as they had been during yesterday’s debate.

President Wilson’s commitment to the cause was undiminished, as he followed up yesterday’s speech to the Senate with personal letters to his fellow Democrats urging them in the strongest personal terms to vote for the Susan B. Anthony (nationwide woman suffrage) Amendment today. Unfortunately, the number of Senators pledged to oppose suffrage was also unchanged from yesterday, and the Amendment failed to pass.

Right up until the time the voting ended, Senator Andreus Jones, Democrat of New Mexico, the amendment’s chief sponsor, had hoped for some last-minute conversions. But when the roll was called, the tally stood at 54 to 30, two short of the 56-28 (two-thirds) majority that would have meant success. (Only a 2/3 majority of those present and voting is needed, not an absolute 2/3 majority of 64 out of 96 Senators.) Had all Senators been present and voting, suffrage forces would still have been two votes short due to 34 being pledged to vote “no.” At the last moment Senator Jones switched his vote to the “no” column so that he would be allowed to call it up for another vote if there was a more favorable outlook. That made the official vote count 53-31, technically three short of victory, but with the measure still alive.

The original count was 27 Democrats in favor and 20 opposed (57% support), and 27 Republicans in favor and 10 opposed (73% support). Not one anti-suffrage Democrat heeded the President’s call to pass the Anthony Amendment as a “War Measure.” Even Majority Leader Thomas Staples Martin of Virginia, and others who have been prominent and vigorous supporters of the President’s other policies, deserted him today. 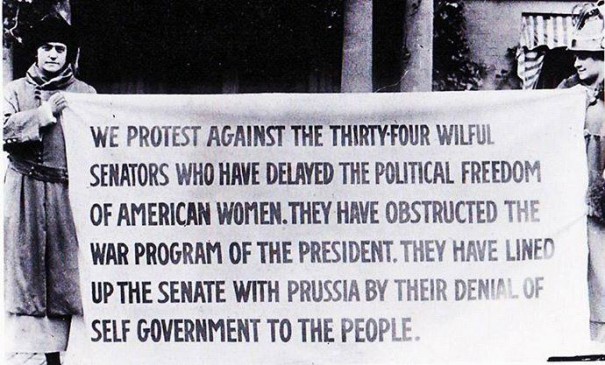 The reason for such strong opposition by Southern Democrats is well-known, and was vividly illustrated by a proposal of Senator John Sharp Williams of Mississippi, He asked that the Anthony Amendment be re-worded so that it would authorize only white women to vote. The motion was overwhelmingly rejected by being tabled 61-22. That 22 of the original 30 votes cast against suffrage were my militant segregationists shows where much of the opposition is now coming from. Suffrage groups and their Senate supporters should be commended for retaining the race-neutral wording of the Anthony Amendment and refusing to give in to Southern Democrats’ demands that they abandon some women in order to enfranchise others.

Today’s debate began with an accurate prediction by Senator Albert Baird Cummins, Republican of Iowa: “I fear that a little group of willful men are intent on binging about the defeat of this amendment.” This was followed by a discussion of whether woman suffrage was truly a “War Measure.” President Wilson insisted yesterday that it was, because we are in a war for democracy, and there could be no better way for our nation to show its commitment to that cause than by enfranchising our women citizens. But other than the “War Measure” issue, the debate covered nothing new, and changed no minds. Senator Knute Nelson, Republican of Minnesota, noted that: “This is not the first time the voice of the prophet has not been heard in the wilderness,” and Senator Cummins followed up with, “No, and I want to know how Senators who vote against this amendment are going to escape the consequences of it.”

William Jennings Bryan was asked if he thought the Senate had disposed of the suffrage issue. He replied:

By no means. The President presented a powerful appeal and it will continue to bring pressure to bear upon opponents of suffrage through the responses the people will make to the President’s appeal. I expect to see the suffrage amendment submitted to the States before March 1 next … it must be remembered that the liquor interests have been the backbone of the opposition to suffrage in the North and that this influence will disappear with the ratification of the Prohibition Amendment … Taking these two influences together, I think there will be more than enough changes to give the necessary two-thirds.

Alice Paul is as confident as Bryan of eventual victory:

This defeat is only temporary. The vote of the Senate, we are convinced, will be reversed before this session of Congress ends. Our efforts to secure the reversal will begin at once and will continue until our victory in the House is confirmed by the Senate.

So, despite today’s discouraging vote, it’s really only a question of whether the Anthony Amendment is approved and sent to the States for ratification by this Congress or the next one.