Eleanor Roosevelt, former First Lady and present U.S. Delegate to the United Nations, today praised the progress the women of the world have made in winning the vote in the five years since the United Nations was established. According to the U.N.’s latest report, women now have the same voting rights as men in 56 countries, a gain of 21 since 1945. 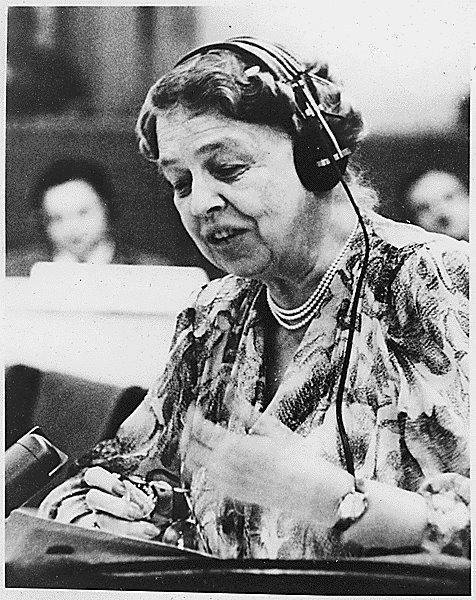 There is still work to do, however, because sixteen countries deny women any political rights: Afghanistan, Columbia, Egypt, Ethiopia, Haiti, Honduras, Iran, Iraq, Jordan, Lebanon, Lichtenstein, Nicaragua, Paraguay, Saudi Arabia, Switzerland and Yemen. In Bolivia, Greece, Mexico, Monaco and Peru, women have partial suffrage and may vote in local elections only. In Guatemala, Portugal and Syria they have full suffrage, but only if they meet educational or literacy standards not required of men.

The right to the franchise is basic and fundamental. The fact that it has been abused, both by citizens and governments, should not blind us to its potential as the fundamental safeguard for the individual. It is axiomatic that political institutions and relations among governments must change. The important point is that when changes are needed they come about peacefully through the free choice of all the people.

She credited the U.N. Charter with helping to speed this trend toward equality for women, and told the General Assembly’s Social Committee that countries in which women do not have equal suffrage were now seen as “out of step with the times.”

Eleanor Roosevelt was first appointed as a delegate to the U.N. in 1945 by President Truman. The next year she became head of the United Nations Commission on Human Rights, and was instrumental in drafting the Universal Declaration of Human Rights in 1948. She said at the time:

We stand today at the threshold of a great event both in the life of the United Nations and in the life of mankind, that is the approval by the General Assembly of the Universal Declaration of Human Rights recommended by the Third Committee. This Declaration may well become the international Magna Carta of all men everywhere. We hope its proclamation by the General Assembly will be an event comparable to the proclamation of the Declaration of the Rights of Man by the French people in 1789, the adoption of the Bill of Rights by the people of the United States, and the adoption of comparable declarations at different times in other countries.

Her continuing commitment to women’s rights can be seen by her actions on May 1, 1946. She was an ex-officio delegate and the most active participant in a discussion of the proposed Statement of Purpose of the U.N. Subcommittee on the Status of Women. She told the members that their task was to work “until you feel women have reached the point where they are on an equal basis with men and are considered human beings.” The subcommittee then adopted as their resolution:

Whereas freedom and equality are essential to human development and whereas woman is as much a human being as man and therefore entitled to share with him; We believe that the well-being and progress of society depend on the extent to which both men and women are able to develop their full personality and are cognizant of their responsibilities to themselves and to others, and we believe that woman has thus a definite role to play in the building of a fine, healthy, prosperous and moral society and that she can fulfill this obligation only as a free and responsible member. Therefore, be it resolved that the purpose of the subcommission is to raise the status of women to equality with men in all fields of human endeavor.

Eleanor Roosevelt has already contributed much to her country, as well as the world, and hopefully will continue to do so for many more years.