The predominately conservative committee approved the measure despite testimony from multiple health care providers and religious leaders lauding the preventive care provided by Planned Parenthood to primarily poor and young women in the state. Now House Bill 298 will go before the Ohio House of Representatives, which is majority Republican. Ohio state Senator Nina Turner told CityBeat, “Voters soundly rejected the foolishness of the radical right on Election Day in favor of the dignit 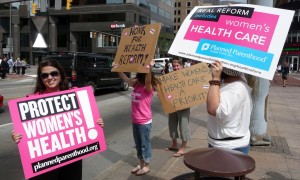 y of American women, but some lawmakers must not have heard. . . While Republicans rail against women making their own choices, they are cutting funding for education and critical social services that children need after they are born. They want small government, all right – small enough to fit into a woman’s womb.”

If House Bill 298 is passed, Ohio will be the tenth state to defund Planned Parenthood, despite the fact that under federal law, this funding cannot be used for abortions. Planned Parenthood health centers across the country provide contraception and basic health care including family planning, cancer screenings, and testing and treatment for sexually transmitted infections to approximately 2.5 million women per year. Each year, Planned Parenthood provides over one million cervical cancer screenings and 830,000 breast exams.

In addition to the defunding of Planned Parenthood, Ohio’s legislature could also consider one of the most restrictive anti-abortion measures in the country as early as next week. House Bill 125 would prohibit abortion once a fetal heartbeat is detected. Such a measure could potentially criminalize abortion as early as six weeks into a pregnancy – before many women know they are pregnant. This bill has been stalled in the Ohio state legislature since June 2011 and is being rewritten so that it can be reconsidered.