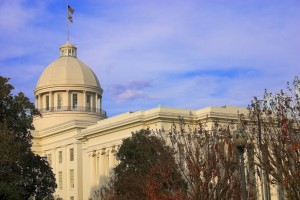 Hundreds gathered early on Tuesday in front of the Alabama Statehouse to protest HB57, a TRAP (Targeted Regulation of Abortion Providers) bill that would impose harsher restrictions on abortion clinics and providers. The bill, coined the Women’s Health and Safety Act, would require an Alabama-licensed physician be present at every abortion and would require these doctors to have admitting privileges to local hospitals. Further, the bill mandates that the name of the father be reported to authorities if the woman seeking an abortion is under the age of 16. The bill also sets stricter building requirements, including wider halls and doors and better fire suppression systems.

According to the Associated Press, several protesters insisted that the legislature is simply attempting to limit access to constitutionally guaranteed abortion treatment. Clinic owners stress that the bill may force them to close because of the expensive major building restorations that would be required.

The Senate passed the bill on a 22 to 10 vote yesterday. This follows the passage of a nearly identical bill by the Alabama House this past February. A committee will meet to reconcile the differences between the two bills before it is sent to Governor Robert Bentley, who is expected to sign the bill into law.

Following the passage of the bill, Planned Parenthood Southeast Vice President of Public Policy Nikema Williams said, “this legislation will make it harder to access health care, which will put women’s health in danger.”

Democratic State Senator Linda Coleman exclaimed “You don’t have any business in my home, in my bedroom or in my body.”