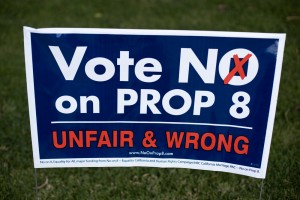 The Supreme Court heard arguments in the case Hollingsworth, Dennis, et al. v. Perry, Kristin M., et al. Arguments lasted for approximately an hour and twenty minutes, at which point the Supreme Court Justicesappeared reluctant on making a decision. They are expected to release a full opinion in June. The Feminist Majority Foundation and the National Organization for Women (NOW) filed an amicus brief in favor of overturning Proposition 8. The brief was written by Michael Rips and Rebecca Edelson of Stepstone and Johnson, LLP. Tomorrow the Supreme Court will hear arguments on the federal Defense of Marriage Act (DOMA), which only recognizes marriage as between one man and one woman.

Thousands of people descended on the Supreme Court to rally as part of the United for Marriage coalition of the National Gay and Lesbian Task Force, Human Rights Campaign and other LGBT advocacy and sympathetic groups , including Terry O’Neill, President of NOW. Other speakers included couples and families impacted by the laws, allies from the sports community, and politicians.