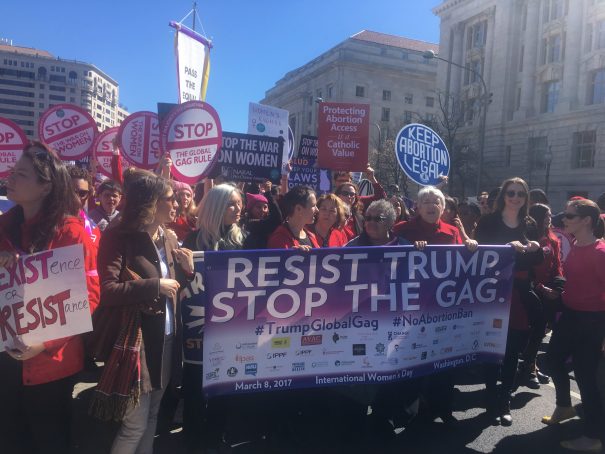 On International Women’s Day, the Feminist Majority Foundation (FMF), in partnership with dozens of other organizations, marched on the White House to demand an end to President Trump’s expanded Global Gag Rule.

Hundreds marched from Freedom Plaza to Lafayette Park in front of the White House to show solidarity with women abroad and protest the President’s instituting of a rule that both bans a safe medical procedure and stifles free speech around the globe. The march culminated in a rally featuring speakers from organizations such as CHANGE, Catholics 4 Choice, In Our Own Voice, Advocates for Youth, NARAL Pro-Choice America, International Planned Parenthood Federation and Feminist Majority Foundation. 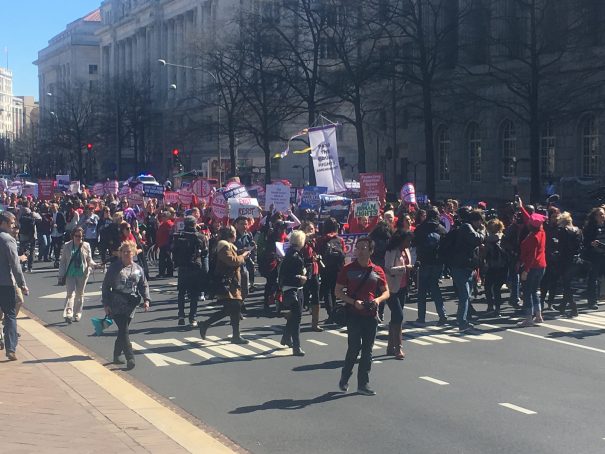 “As one of his very first acts in office, President Trump, with a stroke of his pen, issued a presidential memorandum that will cost tens of thousands of women their lives around the world,” said Eleanor Smeal, President of the FMF.

It was Trump’s second day in office when he reinstated and expanded the Global Gag Rule, a deadly U.S. policy that forbids international nongovernmental organizations (NGO) receiving US global health funding from providing, counseling, advocating, or even referencing abortion, even if these activities are done with non-U.S. funds. 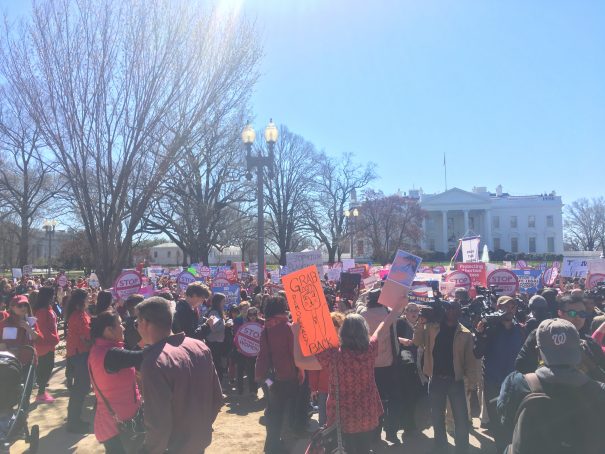 Unlike previous iterations of the Global Gag Rule, most recently under President George W. Bush, Trump’s Global Gag Rule applies to all U.S. global health accounts, not just family planning programs. This expanded rule will impact upwards of $9.5 billion in U.S. global health assistance, and impacts programs providing a range of services, including HIV/AIDS programs and initiatives to combat Zika, malaria, and more.

Marie Stopes estimates that the Trump Global Gag will lead to the deaths of more than 21,000 additional women over the next three years. It is estimated that over 50,000 women a year already die from unsafe abortions around the globe. According to the American Congress of Obstetrics and Gynecologists, 800 women die every day from preventable pregnancy related causes. 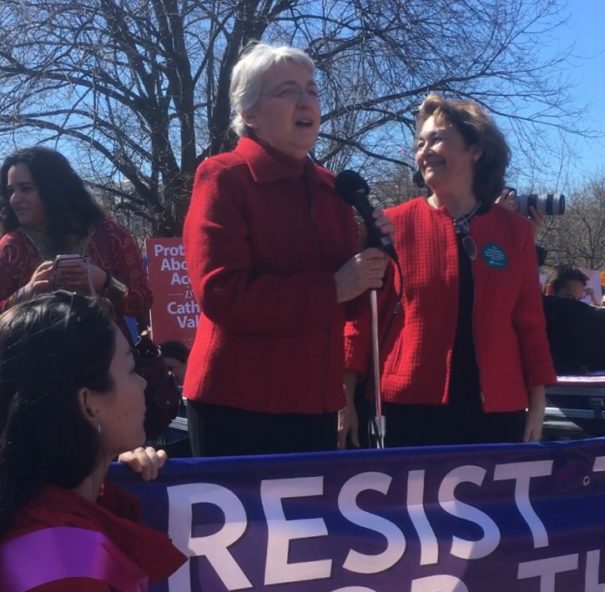 “Trump is shamelessly trading the lives of the poorest women of the Global South for political points at home,” continued Smeal. “We are calling on Congress to stop this blatant disregard for women’s lives and pass the Global Health, Empowerment, and Rights (HER) Act, which would permanently revoke the Global Gag Rule.”

The HER Act was recently introduced in the House by Congresswoman Nita M. Lowey (D-NY), Ranking Member of the Appropriations Committee and its Foreign Operations Subcommittee. Senator Jeanne Shaheen (D-NH), a member of the Senate Foreign Relations Committee and its Foreign Operations Subcommittee, has introduced the HER Act in the Senate.

Strikes and protests took place around the country on International Women’s Day in recognition of the Day Without A Woman action that was organized by the leaders of January’s Women’s March.