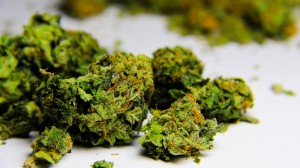 As of 12:01am Thursday morning, the recreational use of marijuana became legal in the state of Washington.

Despite the prohibition of public use of marijuana, over one hundred people gathered around the Space Needle in Seattle, Washington, to ring in the new law with celebratory smoking. Police did not interfere in the demonstrations, but rather will be advising individuals that using marijuana in public places can be punishable by a citation, similar to those issued for public consumption of alcohol. An online post from Seattle Police Department reads “In the meantime, in keeping with the spirit of I-502, the department’s going to give you a generous grace period to help you adjust to this brave, new, and maybe kinda stoned world we live in.”

Under federal law, marijuana is still classified as an illegal narcotic. U.S. Attorney General Jenny Durkan issued a statement on Wednesday warning that despite changes to state laws, the possession, sale, or cultivation of marijuana is still a federal crime.