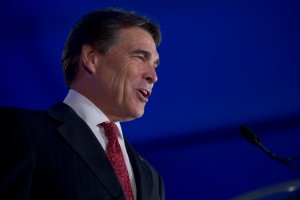 Yesterday, Texas Governor Rick Perry vowed that he would do everything in his power to end abortion access.

At a press conference by Texas Right to Life, Rick Perry told attendees “Let me be clear, my goal – and the goal of many of those joining me here today – is to make abortion at any stage a thing of the past. But while Roe versus Wade prohibits us from taking that step, it does allow us, the states, to do some things to protect life if they can show there is a compelling state interest. I don’t think there’s any issue that better fits the definition of a compelling state interest than preventing the suffering of our state’s unborn.”

While at the press conference, Perry bragged about his previous actions to restrict abortion access, such asdefunding Planned Parenthood and requiring mandatory ultrasounds for women who want to have an abortion. He also endorsed legislation that would ban an abortion past 20 weeks into the pregnancy, even in cases of rape or incest, though no such legislation has been proposed in Texas yet.

“This session, I’m calling on the legislature to strengthen our ban on the procedure, prohibiting abortion at the point a baby can feel the pain of being killed. We have an obligation to end that kind of cruelty,” he said.

Pro-choice activists are already concerned about the implications of Governor Perry’s words. Heather Busby, executive director of NARAL Pro-choice Texas told the Houston Chronicle “This proposed abortion ban is a cruel attempt by anti-choice extremists to curb access to care for women in the most desperate of circumstances.” Bebe Anderson, the U.S. legal director for the Center for Reproductive Rights, told theHuffington Post “There is no denying that Governor Perry and the state legislature’s unprecedented and unrelenting assaults on women’s reproductive rights in 2011 are causing hardship for women in Texas every single day. And now the governor has made it clear that Texas women will once again be public enemy number one in 2013.”