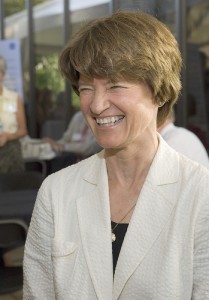 Sally Ride, who made history as the first American woman in space in 1983, passed away on Monday at age 61 from a 17 month battle with pancreatic cancer. In addition to her achievements as an astronaut, Ride held a Ph.D. in astrophysics and was a lifelong advocate of women and girls in science, technology, engineering, and mathematics (STEM).

In 2001 she founded Sally Ride Science, an organization that provides STEM-oriented educational programs, materials and teacher training. As President Obama said in a statement on Monday, “She inspired generations of young girls to reach for the stars and later fought tirelessly to help them get there by advocating for a greater focus on science and math in our schools.”

Ride was well-known as a public figure who valued her privacy. According to the New York Times, NASA kept Ride’s illness secret at her request. The world outside Ride’s family and friends learned of her life-partner of 27 years, Tam O’Shaugnessy, in her obituary posted on Sally Ride Science.