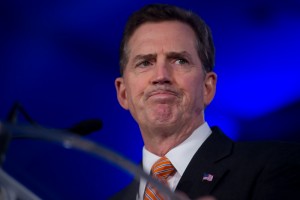 South Carolina Senator Jim DeMint announced on Thursday that he will be leaving the Senate to lead the conservative think tank The Heritage Foundation at the end of the year.

Jim DeMint was a vocal Tea Party Republican in the Senate who is credited by the New York Times as helping spark the Tea Party movement. In 2012, he endorsed controversial candidates Richard Mourdock and Todd Akin, who both gained national infamy with their comments regarding rape and abortion. In 2010, DeMint gained national press when he told reporters openly gay people and women engaging in premarital sex should not be allowed to teach in schools.

In a statement, DeMint said “I’m leaving the Senate now, but I’m not leaving the fight. I’ve decided to join The Heritage Foundation at a time when the conservative movement needs strong leadership in the battle of ideas.”

South Carolina’s governor Nikki Haley (R) will now have to select a replacement to serve until the next election in 2014. Many favor state Representative Todd Scott (R), who, according to the New York Times, was the first African American to serve in South Carolina’s Congress since Reconstruction after the Civil War. Among others who are possibly vying for the open seat is TV personality Stephen Colbert, who made an unsuccessful bid to run for President in the state in 2008 and is the host of Comedy Central’s “The Colbert Report“.