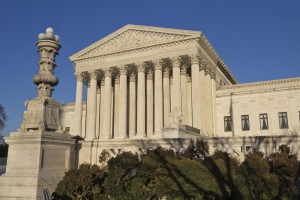 Associate Justice Scalia was speaking at a lecture at Princeton to promote his new book. Self-identified gay first year student, Duncan Hoise, asked Scalia about his dissenting opinion in the 1993 case Lawrence v Texas in which Scalia compared having morals against homosexuality to having morals against murder or bestiality.

“If we cannot have moral feelings against homosexuality, can we have it against murder? Can we have it against other things?” Scalia questioned. “It’s a form of argument that I thought you would have known, which is called the ‘reduction to the absurd.’ …I don’t think it’s necessary but I think it’s effective,” he explained. Scalia concluded “I’m surprised you aren’t persuaded.”

Scalia’s remarks come just a few days after the Supreme Court announced that it will see a case regarding the Defense of Marriage Act (DOMA) and Proposition 8 next year. Though official dates have not been determined, hearings on the cases will most likely begin in late March with a ruling expected sometime in June.