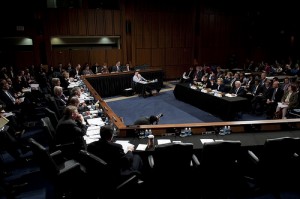 Republicans on the Senate Foreign Relations Committee tried to make abortion the primary issue in the Committee’s hearing today on the Convention on the Rights of Persons with Disabilities. Despite their attempts, the treaty was voted out of Committee on a vote of 13-6 with three Republican Senators voting with the 10 Democrats on the Committee.

Although Republican Senators Richard Lugar (IN), Johnny Isakson (GA) and John Barrasso (WY) voted with the Democratic majority to send the treaty to the floor, all three joined with their fellow Republicans in a failed attempt to pass an anti-abortion amendment offered by Senator Marco Rubio (R-FL). Democrats argued that the politics of abortion have no place in the discussion of the treaty which is about the rights of persons with disabilities. Senator Barbara Boxer suggested to the Republican Senators that if they want to have a debate on abortion, they should do so on the floor of the Senate, not in the discussion about a treaty on the rights of the disabled.

Committee Chair Senator John Kerry’s Secondary Amendment to Rubio’s anti-abortion amendment passed on a party line vote with all 10 Democrats voting yes and all 9 Republicans voting no. The Kerry Amendment stated that the treaty is a “non-discrimination instrument” that it does not address particular health programs or procedures, but “Rather, the Convention requires that health programs and procedures are provided to individuals with disabilities on a non- discriminatory basis.”

The treaty, which has strong support from the disabilities community will now go to the Senate floor where ratification requires a two-thirds vote.

Photo credit to Flickr user Chairman of the Joint Chiefs of Staff.