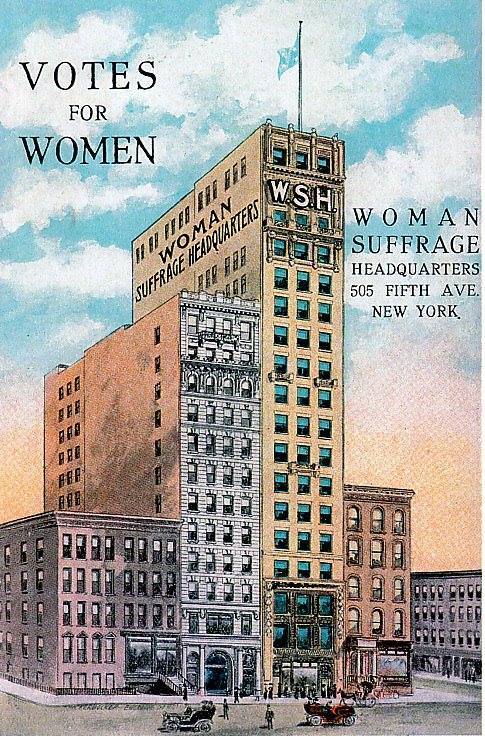 It’s a new era in the suffrage battle, and a new headquarters for the National American Woman Suffrage Association.

After six years in Warren, Ohio, first at the home of the group’s Treasurer, Harriet Taylor Upton, then in the Trumbull County Courthouse, N.A.W.S.A. has moved back to New York City, and is now situated on the 17th floor of 505 Fifth Avenue, at 42nd Street.

Rent for the entire floor – $5,000 a year – will be paid by Alva Belmont. Divorced in 1895 from her first husband, William Vanderbilt, and widowed last year by the untimely passing of Oliver Hazard Perry Belmont, she has since become quite active in the suffrage movement. On July 15th she made an incredibly generous contribution to the cause by agreeing to lease space for this “suffrage headquarters” to be used exclusively by organizations working to win the vote for women.

Today, reporters and photographers were given a tour of all nine rooms – plus free “Votes for Women” pins from N.A.W.S.A. President Anna Howard Shaw, who pinned them on each guest personally. Of course, many “won’t be able to get into the newspaper office wearing them,” joked Belmont.

Things are not yet in complete order, as the largest room in the suite is filled with 24 cases of suffrage literature, and the bookshelves lack books, but have a surplus of flowered hats upon them. The offices themselves are all quite attractive. In the president’s room are fine portraits of pioneer suffragists, and the reception room, near the front, is furnished with black carved oak. Next to that is Alva Belmont’s office, furnished in mahogany.

Since so many reporters were gathered together, it seemed like a good time for Ida Husted Harper to address one of her pet peeves. There has been a great deal of publicity in the U.S. lately about violent actions taken by British “suffragettes.” Militants there use that word to distinguish themselves from the more moderate suffragists, even though it was originally used in the press as a derogatory term. So Harper said: “We would be very glad if you would not call us suffragettes. The suffragettes are all right, and we have no quarrel with them, but we represent the suffragists of long standing, and the word suffragette is the one for the suffragists who have adopted militant methods.”

Shaw outlined an ambitious program, and specifically mentioned major suffrage campaigns to be carried out in Washington State, Oregon and South Dakota, as well as the Territory of Arizona. N.A.W.S.A. will even try to have some sort of suffrage legislation introduced in the legislatures of all 42 non-suffrage States this Winter. Now that the nation’s largest suffrage group is situated in such a strategic location, and rent is not a burden, the future of the cause seems very bright. Though women can only vote in four of the forty-six States (Wyoming, Colorado, Utah and Idaho), the long drought – 13 years without winning the vote in a single State – may be about to end, and a suffrage renaissance begin.