In an unprecedented victory for the suffrage movement, all women in New Zealand, regardless of economic status or race, won full voting rights today.

The struggle goes back to 1869, when Mary Ann Miller wrote “An Appeal to the Men of New Zealand,” advocating female suffrage. Two years later, Mary Colclough gave the first public lecture on the subject. Earlier bills, which would have extended the suffrage to women taxpayers only, were introduced into Parliament in 1878, 1879 and 1887, and only narrowly defeated. But thanks to the leadership of Kate Sheppard, as well as the tireless work of Women’s Christian Temperance Union (W.C.T.U.) campaigners, a winning strategy was devised and a bill granting universal and unrestricted woman suffrage was passed.

The start of the campaign was quite modest. In 1887 two petitions signed by 350 women were presented to the House of Representatives. By the next year there were 800 signatures. But after this slow start, suffrage began to pick up major support. In 1889, the enthusiasm of the newly-established Tailoresses’ Union was added to that of the W.C.T.U. In 1891, nine thousand women signed eight petitions. A year later the Women’s Franchise League was established, and six petitions with 19,000 signatures were presented. Earlier this year 13 petitions containing 32,000 signatures were submitted. 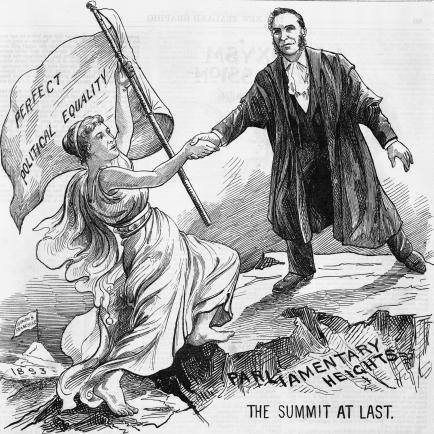 As in the United States, major opposition to woman suffrage has come from those who believe that a woman’s “natural” role as wife and mother is incompatible with politics, and from the liquor industry. Since a good deal of the work for suffrage has been done by the W.C.T.U., it was not difficult for liquor interests to generate fear of prohibition if women won the vote, and gather signatures for anti-suffrage petitions in the nation’s pubs.

This year’s final victory was by no means assured at any time. Premier John Ballance, who supported woman suffrage, died in April, and was succeeded by Richard Seddon, strongly anti-suffrage and on very friendly terms with liquor interests. But the huge number of signatures on the petitions – representing a substantial percentage of the nation’s women – were sufficient to get an Electoral Bill passed by the House. A furious campaign then ensued as it went to the Legislative Council, which had rejected two previous suffrage bills.

There were many rallies, plus heavy lobbying of Council members, both in person and by telegrams. Anti-suffragists went all out, with Seddon using every trick in the book to pressure his fellow legislators to vote “no.” Finally, the day of the vote arrived, with pro-suffrage members of the Legislative Council wearing white camellias in their buttonholes. Apparently Seddon’s underhanded and strong arm tactics must have gone too far, offending two anti-suffragists sufficiently for them to change their votes to “yes,” so the measure carried 20 to 18.

Opponents, now wearing red camellias, didn’t give up, and spent the eleven days after the vote pressuring the Governor not to sign the bill. But today the Electoral Bill became the Electoral Act with Lord Glasgow’s signature, and the battle for unconditional, universal woman suffrage in New Zealand ended successfully.

Though technically a part of the British Empire, the nation has been self-governing since 1852, thanks to the British Parliament passing the New Zealand Constitution Act. Property-owning women won the vote on the Isle of Man in 1881, but it is a Crown Dependency, not a nation, and women who do not meet the property qualifications are still voteless, so New Zealand’s action is unique.

Today’s action means another unique event will occur soon. Since all adult citizens of New Zealand may vote in the next election, the New Zealand Parliament will soon become the only national governing body in the world freely selected by all of its people, and its Premier (or “Prime Minister”) will be the only national leader who can claim to have a fully legitimate right to hold such an office and exercise the powers that go with it.

Hopefully, the United States will follow New Zealand’s example of universal adult suffrage. Though racial discrimination is explicitly outlawed by the 15th Amendment, racially discriminatory laws such as outrageously designed and administered “literacy tests” and heavy “poll taxes,” as well as terrorist acts of white supremacist groups have effectively disenfranchised millions of men in many States.

At present, U.S. women can vote only in the State of Wyoming, where they won the ballot in 1869, when it was still a Territory. Women who possessed a certain amount of property could vote in New Jersey from 1776 until 1807. In Utah Territory women could vote from 1870 until 1887, when Congress passed the Edmunds-Tucker (anti-polygamy) Act and disenfranchised them. Women in Washington Territory won the vote twice, but legislation passed by the Territorial Legislature in 1883 was overturned by the Territorial courts in 1887, and a bill passed in 1888 was similarly voided. In 1889 a suffrage referendum in what had by then become the State of Washington was defeated by a 2-1 margin. But there is a suffrage referendum on the ballot in Colorado on November 7th, so a second suffrage State could be won soon. As was the case in New Zealand, persistence may yet pay off, and this could become a year of two suffrage victories!