Outrageous discrimination in regard to both age and sex was the subject of a hearing today before a Labor Subcommittee of the House of Representatives. 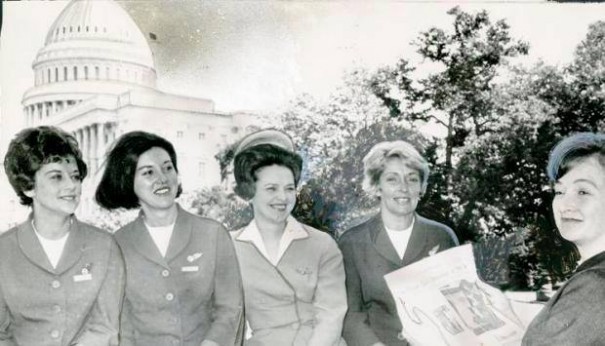 Colleen Boland, head of the Air Line Stewards and Stewardesses Association, supported by other uniformed stewardesses in the hearing room, discussed the injustice of airlines automatically grounding or firing stewardesses who married, or reached age 32, and imposing other equally bizarre and unique rules, such as extremely exacting weight and appearance standards.

Boland noted that stewardesses were primarily judged on their sex appeal, rather than their competence at preparing and serving food, attending to sick passengers, or being ready to give critical instructions to those on board in case of an aircraft emergency. She quoted one airline executive as explaining why beauty trumped ability or experience: “If we put a dog on a plane, 20 businessmen are sore for a month.”

Though some Members of Congress were patronizing or frivolous, Representative William D. Hathaway, Democrat of Maine, was quite supportive of Boland’s testimony. He said that he would like to “eradicate from the minds of the public” the idea that airplanes were “flying bunny clubs.” This is a reference to Playboy Clubs, where young, voluptuous women dress in skimpy outfits and wear bunny ears while serving patrons.

Apparently being unmarried as well as youthful is a part of the fantasy that’s being served to the male passengers, because a substantial number of stewardesses have had to keep their marriages a secret in order to continue working.

This is not the first time that stewardesses have gone public with their justifiable complaints about discrimination. Nancy Collins and Dusty Roads have been trying to better working conditions in their profession for many years. After being ignored by executives in male-dominated unions, they got together with Representative Martha Griffiths, Democrat of Michigan, to get a bill passed that would prohibit airlines from firing or grounding stewardesses at 32 (or 35 in some cases). But the nearly all-male Congress never took the issue seriously, so what some of its members referred to as the “Old Broads Bill” was never passed.

Two years ago Collins, Roads and a number of their colleagues held a press conference at the Commodore Hotel in New York City. Because of the glamour associated with their airborne profession, the press showed up, and one photo even went nationwide. In the caption to that one, readers were asked to guess which four of the uniformed stewardesses were over 32, and therefore supposedly “too old” for the job. (Collins, Roads and two others were over that age and still working because the “out at 32” rule was only instituted in November, 1953, and the way the airlines got the unions to agree to such a ridiculous practice was to exempt any woman working at the time.)

Other avenues to justice are being pursued as well. Last year, stewardess unions filed a complaint against T.W.A. and American Airlines with the New York State Human Rights Commission. Though the Empire State has no law banning sex discrimination, New York has had a law banning age bias since July 1, 1958, though the emphasis is on those over 45, so it may not apply.

The passage of the Civil Rights Act of 1964, which outlaws sex bias, and the establishment of the Equal Employment Opportunity Commission are the most promising recent developments. Roads and Jean Montague (the latter about to be fired for turning 32), went to the E.E.O.C. office so soon after it opened this summer that they helped unpack the new office’s typewriters. The union is now trying to get the E.E.O.C. to hold hearings on the issue.

The airlines have powerful incentives to continue to discriminate. They think young, thin, attractive, unmarried women are a great marketing tool in general, and they’re seen as especially critical to United’s “Executive” flights, which are strictly limited to male passengers only. Airline companies also know that an employee who has only a brief career will never earn much more than a beginner’s salary, will be unable to gain the respect and authority that comes from seniority, and won’t be getting generous retirement benefits.

But though the suffrage movement ended 45 years ago, there are still women willing to work for full equality, and the inequality of treatment in regard to male and female employees in the airline industry is so blatant that it seems one of the more logical places to renew the struggle for equal rights.