It was truly stunning and historic when President Wilson unexpectedly came into the Senate at 1:00 this afternoon to speak for fifteen minutes on the necessity and justice of that body voting in favor of the Susan B. Anthony (nationwide woman suffrage) Amendment.

It has already been approved by the House, which on January 10th, the day after President Wilson endorsed it, gave it exactly the 2/3 majority needed. But the Senate had been postponing action, and because Democrats constitute 22 of the 34 votes pledged to vote against the Anthony Amendment, a pro-suffrage pep-talk by a Democratic President was welcomed by all factions of the suffrage movement.

In his address, Wilson went so far as to call the suffrage amendment a “War Measure,” the highest priority a President can assign to legislation he wishes to be passed. He said, in part:

I regard the concurrence of the Senate in the Constitutional amendment proposing the extension of suffrage to women as vitally essential to the successful prosecution of this great war of humanity in which we are engaged … It is my duty to win the war and to ask you to remove every obstacle that stands in the way of winning it. I had assumed that the Senate would concur in the amendment because no disputable principle is involved but only a question of the method by which the suffrage is to be extended to women…

This is a people’s war and the people’s thinking constitutes its atmosphere and morale, not the predilections of the drawing room or the political considerations of the caucus. If we indeed be democrats and wish to lead the world to democracy, we can ask other peoples to accept in proof of our sincerity and our ability to lead them whither they wish to be led nothing less persuasive and convincing than our actions. Our professions will not suffice. Verification must be forthcoming when verification is asked for…

This war could not have been fought, either by the other nations engaged or by America, if it had not been for the services of women – services rendered in every sphere – not merely in the fields of effort in which we have been accustomed to see them work, but wherever men have worked and upon the very skirts and edges of the battle itself. We shall not only be distrusted but shall deserve to be distrusted if we do not enfranchise them with the fullest possible enfranchisement, as it is now certain that the other great free nations will enfranchise them … The executive tasks of this war rest upon me. I ask that you lighten them and place in my hands instruments, spiritual instruments, which I do not now possess, which I sorely need, and which I have daily to apologize for not being able to employ. 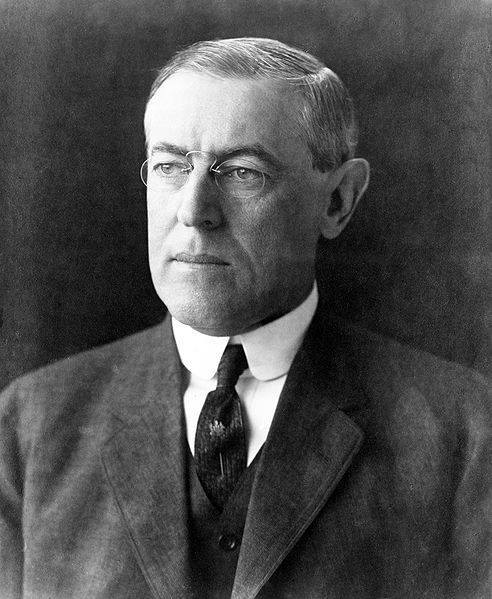 President Wilson’s journey from a position of woman suffrage being a matter for the States to decide for themselves, to “sympathy for the cause,” but no specific endorsement of the Anthony Amendment, to endorsement but no action, and finally to today’s vigorous lobbying for the measure on the eve of a crucial vote, has been a long and trying trek. Ever since his first inauguration in 1913, all suffragists have been urging him to use his considerable influence to get the amendment through successive Democratic Congresses and sent to the States for ratification.

Alice Paul and other members of the National Woman’s Party began engaging in peaceful protests along the White House fence on January 10, 1917, and suffered arrests, imprisonment, brutality by guards, and force-feedings when they began prison hunger strikes. All of this the result of publicly pointing out Wilson’s previous hypocrisy of strongly promoting democracy around the world while doing nothing to bring it to the female half of his own country. This summer the National Woman’s Party began protesting Senate inaction as well as Wilson’s insufficient support, and on September 16th staged a colorful and well-publicized protest at the Lafayette Monument. The next day the Senate suddenly decided to schedule a vote for October 1st.

While the National Woman’s Party has not yet commented on today’s speech, Carrie Chapman Catt, president of the National American Woman Suffrage Association, and who had personally asked Wilson to address the Senate, said:

No country has paid so great a tribute to its women as was paid the women of our country today, when the President of the United States entreated the Senate to pause no longer in the passage of the Federal amendment. He perceives that the new faith in the ultimate outcome of the war, that exultation of spirit which would come to women through the recognition of their political equality, would bring into the war spiritual forces not now engaged. The President today took a stand for human liberty which no man can gainsay.

For more than forty years I have devoted my life to securing the ballot for women because I have always believed it to be a fundamental principle of right and justice, but from this day I have the authority of the Commander-in-Chief of the Army and Navy. Although the patriotism of American women will always lead them to devoted service for their country, the fact that their country recognizes the justice of their claim to political freedom will hearten and encourage them in service as nothing else can.

Whether President Wilson’s speech will change the outcome of tomorrow’s vote remains to be seen. Southern Democrats, now the principal bottleneck to nationwide woman suffrage, seem as vehemently opposed as ever, judging by some of their speeches today following Wilson’s presentation. As “States’ Rights” advocates, they tend to oppose Constitutional amendments in general, and are particularly opposed to this one because it is race-neutral and Section Two gives Congress the right to pass appropriate legislation to enforce the voting rights it would grant to all women.

Though lobbying by pro-suffrage Senators of their colleagues continues, not a single Senator of either party has yet announced a shift to the suffrage side. So, the tally at the end of the day is still what it was this morning: Sixty-one in favor, thirty-four opposed, and one doubtful, but leaning toward suffrage. Sixty-four of ninety-six Senators must vote in favor of a Constitutional amendment in order for it to pass by a two-thirds majority if all are present. The party lineup tonight is as follows: Twenty-nine Democrats in favor, twenty-two opposed (57% support); Thirty-two Republicans in favor and twelve opposed (73% support), with Senator George Martin, Democrat of Kentucky, leaning toward suffrage, but still uncommitted.

Knowing a vote today would be a defeat, Senator Andreus Jones, Democrat of New Mexico, the Anthony Amendment’s sponsor, wisely moved for a recess until tomorrow. A vote will be taken then, with everyone on the suffrage side – including the President of the United States – having done their best to get a favorable result.

If Senator Martin votes as expected, and two votes can somehow be changed overnight, the Anthony Amendment will be sent to the States, with 36 approvals needed to make woman suffrage the law of the land. If the amendment is rejected tomorrow, then the National Woman’s Party’s campaign to elect Republicans and unseat Democrats in November’s elections will become even more intense, and the National American Woman Suffrage Association’s rumored “back-up plan” of targeting four specific anti-suffrage Senators for defeat will likely be implemented. Either way, victory in Congress seems to be approaching, the only question is whether it will be tomorrow, or after some long overdue changes are made in the composition of the Senate after the November elections.