Just 26 days after becoming First Lady, Betty Ford held her first press conference today, making it clear to the 142 reporters and photographers in the State Dining Room of the White House that helping ratify the Equal Rights Amendment would be among her priorities.

Today’s full-fledged news conference was an unprecedented move by a First Lady. Eleanor Roosevelt held 348 press conferences, but they were far more informal, and open to women only, as a way of helping them get ahead in a male-dominated profession.

Though Ford doesn’t intend to get involved in partisan political issues, she does want to encourage women to play an active role in politics. There is, of course, one exception to her non-partisan role as First Lady, and she left no doubt that she’d be campaigning for President Ford in 1976.

In regard to participating in the campaign for the E.R.A., a measure endorsed by Republicans since 1940 and Democrats since 1944, Ford said: “I would be happy to take part in it.”

She intends to lobby for the amendment in the 17 states that have not yet ratified to help get the five more needed. Though her husband once joked about the issue with her when he was a Member of Congress, and in 1971 backed off his initial strong support of it a year earlier due to pressure from some of his anti-E.R.A. constituents in Michigan’s Fifth District, the First Lady assured the press that the President was now an E.R.A. advocate. He re-endorsed the E.R.A. on August 22nd at a press conference just 13 days after President Nixon resigned and Mr. Ford assumed the Presidency.

When asked whether her views on abortion were closer to those of Vice-Presidential nominee Nelson Rockefeller, a strong advocate of legalization when Governor of New York (1959-1973), or those of New York Senator James Buckley, who wants last year’s “Roe vs. Wade” Supreme Court ruling reversed and to have abortion re-criminalized, she said that her views were “definitely closer” to those of Rockefeller. 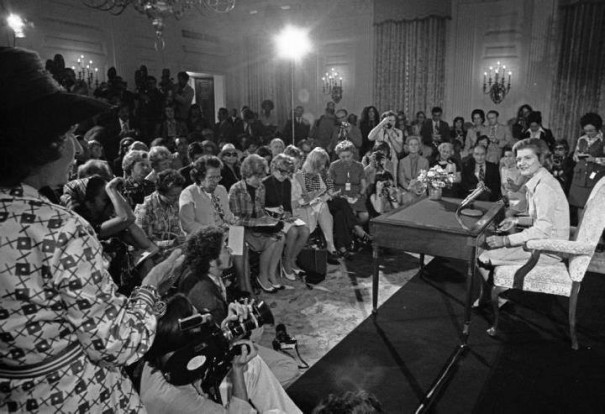 On other issues, she said the vacation White House would be in Vail, Colorado, that she was being kept quite busy with her new duties since becoming First Lady, and that the children have adjusted to life in the White House quite well.

The Equal Rights Amendment was passed by Congress and sent to the states for ratification on March 22, 1972, and has until March 22, 1979 to gain the 38 state approvals needed for inclusion in the Constitution. Polls show consistent public support for the measure, and so far 33 states have ratified, three this year: Maine, Montana and Ohio. The Equal Rights Amendment reads:

Section 1. Equality of rights under the law shall not be denied or abridged by the United States or by any state on account of sex.

Section 2. The Congress shall have the power to enforce, by appropriate legislation, the provisions of this article.

Section 3. This amendment shall take effect two years after the date of ratification.

Though the pace of ratifications has slowed, that’s to be expected, as the more progressive states would ratify quickly, the more conservative ones more slowly – and after a battle. But with only five more states needed to ratify, and four and a half years to get them to do so, plus the strong support of the First Family, things are definitely looking up for the Equal Rights Amendment 51 years after the campaign for it was launched by the National Woman’s Party.