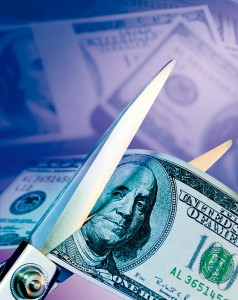 Today the automatic government spending cuts called “sequesters” will go into effect at midnight. The cuts that total $85 billion of funding for government programs will have a disproportionately harsh impact on women, not only in the United States but around the world.

$32 million will be cut from overseas family planning programs, resulting in almost 1.7 million women losing access to contraception and an estimated 500,000 more unplanned pregnancies. Many of these programs also work to fight maternal mortality across the world and experts predict that the impact of the sequester will result in approximately 1,292 more women dying as a result of childbirth.

According to the Center for American Progress, $15 million will be cut from Title X programs, which provide funding for family planning providers for contraceptives and services including cancer screenings and STI/HIV testing. Title X also includes funding for infertility services and health care referrals. These cuts could result in approximately 130,000 women losing family planning access. In addition, the National Breast and Cervical Cancer Early Detection Program, which helps lower income women access diagnostic services such as mammograms and clinic breast and pelvic examinations to prevent cancer, will be cut. These cuts combined could threaten family planning clinics across the country because they may no longer receive enough funding for basic services to stay open.

While Congress did approve the Violence Against Women Act yesterday, the sequester strips funding for violence prevention programs authorized by VAWA. A total of $13 million would be cut from violence prevention funding across the country. The three states that would see the greatest cuts in the STOP Violence Against Women Program created by VAWA are California, Texas, and New York. These three states alone could lose funding that would benefit an estimated 6,700 victims of violence.

WIC, or the Special Supplemental Nutrition Program for Women, Infants, and Children program that supplies food security for low income mothers and their children would lose $600 million in funding. In addition, child care programs which are essential for working families that cannot afford private child care will see dramatic cuts alongside funding for child vaccination programs that could see 32,000 fewer children vaccinated as a result of sequester cuts.

Primary and secondary educational programs will see $713.3 million cuts in funding. California, Texas, and Florida will see the largest decreases in funding of public K-12 education, risking an estimated 2,890 teacher jobs at the grade school level. These states also could see large decreases in funding for programs focusing on education for children with disabilities. Higher education will also be impacted by reduced funding in financial aid and work study jobs that benefit primarily low-income students.

At a press conference yesterday, Nancy Pelosi lead women Representatives in condemning the effects the sequester will have on women. Pelosi addressed the media, “Cuts to women’s health from pre-natal care to cancer screenings; cuts to services to victims of domestic violence; …cuts to initiatives to support children and families like WIC and Head Start. …For the sake of America’s women …Democrats and Republicans must work together to protect the middle class.” Representative Rosa DeLauro echoed Pelosi’s sentiments in saying “Allowing these cuts to pass is reckless, it’s irresponsible and it is especially harmful to women, to their jobs and to the services that they rely on.” Today, President Obama is meeting with leading Congressional officials in an attempt to see what resolution, if any, can be reached to avoid the extreme cuts.