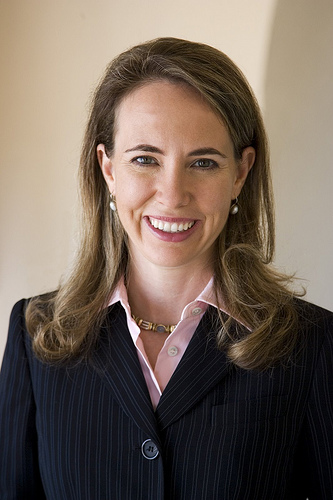 Arizona Democrat Gabrielle Giffords is fighting for her life in a Tucson hospital after  having been shot in the head by a gunman while she conducted a “Congress on Your Corner” event in front of a market.

Although she was listed in very critical condition after surgery, Dr. Peter Rhee, medical director of the trauma and critical care unit at the University Medical Center where Giffords is being treated, said he was “very optimistic about her recovery.”

A total of 19 people were shot in the attack by what seems to have been a single gunman. Six people were killed, including federal district judge John M. Roll. Police have in custody the suspected shooter, 22-year-old Jared Lee Loughner.

Pima County Sheriff Clarence Dupnik, at a press conference this afternoon, said that law enforcement are also looking for a possible second suspect, a white man in his 50s.

Dupnik had critical words about the climate in the country and his state surrounding this act of violence:

When you look at unbalanced people, how they respond to the vitriol that comes out of certain mouths about tearing down the government. The anger, the hatred, the bigotry that goes on in this country is getting to be outrageous. And, unfortunately, Arizona I think has become sort of the capital. We have become the Mecca for prejudice and bigotry….

Let me just say one thing, because people tend to pooh-pooh this business about all the vitriol that we hear inflaming the American public by people who make a living off of doing that. That may be free speech. But it’s not without consequences

Giffords’ office had been the target of vandalism last year after she voted for health-care reform. She was also targeted–quite literally–for defeat by Sarah Palin’s political action committee before the November 2010 midterm elections. SarahPAC put forth a map of the U.S. with 20 locations marked with the crosshairs of gun sights to indicate 20 House Democrats, including Giffords, who voted for the health-care bill and thus should be turned out of office. Responding to that, Giffords told MSNBC:

We need to realize that the rhetoric, and the firing people up and … for example, we’re on Sarah Palin’s targeted list, but the thing is, the way she has it depicted, we’re in the crosshairs of a gun sight over our district. When people do that, they’ve got to realize that there are consequences to that action …

Get on Target for Victory in November[.] Help remove Gabrielle Giffords from office[.] Shoot a fully automatic M15 with Jesse Kelly[.]

Giffords, the first Jewish woman elected to Congress from Arizona, is considered a moderate “Blue Dog” Democrat. Supported by feminist groups, she is pro-choice and has stood up for comprehensive immigration reform, health-care reform, stem-cell research and raising the minimum wage, among other positions.

Photo of Giffords from Flickr user Freedom to Marry under Creative Commons 2.0