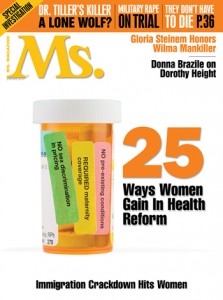 Feminists didn’t get everything we wanted in the historic health-insurance reform package passed in March: The lack of a public option and limits on abortion coverage were the most glaring setbacks, and a single-payer system wasn’t even considered. But bottom line, an additional 32 million Americans will gain health-care coverage—meaning that the vast majority in the U.S., some 95 percent, will be covered.

Considering the hundreds of millions spent by the health-insurance industry in federal lobbying, the intransigence of the Republican bloc in Congress and the lack of a pro-choice majority in either house, it’s a wonder that anything was achieved, let alone historic gains for millions of people, especially women.

For years, insurance companies denied discrimination against women and/or put forth bogus claims to justify it. With the passage of this reform package, the beginning of the end of health-insurance sex discrimination, in both benefits and pricing, is at hand. One attribute, for sure, of the women’s movement—we don’t take no for an answer when it comes to obtaining women’s equality. And we never give up or give in.

Here are 5 gains we can cheer:

1. The legislation essentially contains a “Title IX” for women. It states that, with a few exceptions, an individual cannot “be excluded from participation in, be denied the benefits of, or be subjected to discrimination under any health program or activity, any part of which is receiving federal financial assistance.”

2. As Speaker Nancy Pelosi said, “No longer will being a woman be considered a pre-existing condition.” Gender rating—charging women more than men for health insurance—is eliminated for individuals plans and for employer plans covering fewer than 100 employees. Today, in most states, women with individual plans pay as much as 48 percent higher premiums than men for the same coverage.

3. The legislation requires that insurers provide maternity coverage; currently, about 80 percent of individual insurance policies do not.

4. Companies with more than 50 employees must also provide breastfeeding mothers reasonable break time and a room to express milk.

5. The act funds support services for, and education and research on, postpartum depression.

6. … To find out the rest, you’ll need to get the new issue of Ms. on newsstands May 25—or direct to your door by becoming a Ms. Member!