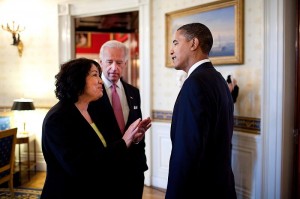 Buried in the stories about the Sonia Sotomayor hearings are mentions of the arrests at the hearings of four anti-abortion protestors, including Norma McCorvey, who is the Roe of Roe v. Wade.

Not mentioned is the disgusting, little pamphlet being handed out there by supporters of Randall Terry, founder of the original Operation Rescue, an extreme anti-abortion group. In launching his 12-city tour to “defeat” Sotomayor he released this horrifying skeleton image of Sotomayor. Take a look at it and realize the depths to which the “culture wars” have sunk.

If it makes you shudder you are in contact with reality. If you shrug your shoulders and say “oh well” you have become too blasé.

If you are reminded of Dr. George Tiller’s ghastly murder – welcome to my world. Operation Rescue in Wichita, KS harassed Dr. Tiller, his family, his co-workers, and his patients for years. Now the Wichita Operation Rescue gang is moving on to harass Dr. Leroy Carhart.

Don’t think, however, only the likes of Randall Terry are providing horrifying discourse on abortion. Senators can do it too.

Remember the 2004 quote from extreme right to life Senator Tom Coburn (OK): “I favor the death penalty for abortionists and other people who take life.”

Rachel Maddow (MSNBC) just featured this quote in her expose on “The Family.” Coburn lives in “The Family’s” townhouse at 133 C Street, two blocks from the Capitol. The townhouse, according to Jeff Sharlet (see below) is “run by a Family affiliate called the C Street Foundation,” which has, get this, tax-deductible status as a church. Coburn lives with several other right-to-life members of Congress – including the now disgraced Senator John Ensign (NV). The “boys” at “The Family” also gave advice to another disgraced politician, Governor Mark Sanford (SC). As Sanford spilled the beans at his unforgettable press conference he related how he worked through how to handle his affair with this Christian Bible Study group at 133 C Street and in so doing put “The Family” in the spotlight. Something this ultra secret church shuns. Unbelievable!

Watch Rachel Maddow and get Jeff Sharlet’s (contributing editor of Harper’s Magazine) “The Family: The Secret Fundamentalism at the Heart of American Power.” It’s shocking—and that is saying something at my age. I recommend it—but it like the ghoulish pamphlet on Sotomayor—will keep you up at night.