According to new data, seven of the 11 major metropolitan areas with rates of uninsured people higher than the national average are in states that have rejected Medicaid expansion under the Affordable Care Act.

According to the US Census Bureau’s Community Survey – the nation’s most comprehensive data source on American households examining state and local poverty, income, and health insurance statistics – 13 states saw a statistically significant increase in the amount of residents covered by health insurance between 2012 and 2013. Among the top 25 largest US cities, however, 11 have rates of uninsured individuals that beat the national average across all metro areas. Seven of those metropolitan areas are in Florida, Georgia, North Carolina, and Texas – states where GOP-controlled legislatures have resisted Medicaid expansion under the Affordable Care Act.

Miami is now the city with the highest percentage of uninsured people in America, topping the charts at 25 percent, although it wasn’t the only Florida city to exceed the national average. Texas, home to three of the eleven cities with irregularly high uninsured populations, also has the highest percentage of uninsured residents in the nation. In Georgia, where close to 20 percent of Atlanta’s residents are uninsured, lawmakers are prohibited from even advocating for Medicaid expansion. In North Carolina, over 15 percent of Charlotte’s population is uninsured. This summer, Republican Mayor Adam O’Neal of Belhaven, NC, marched to the US Capitol on foot for 15 days to protest the forced closure of a rural hospital resulting from Governor Pat McCroy’s refusal to expand Medicaid. 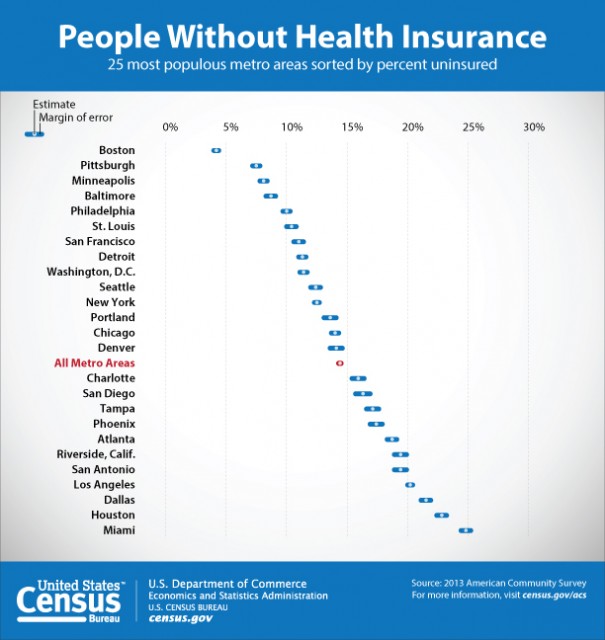 Prior to the implementation of the Affordable Care Act (ACA), Medicaid enrollment was only open to pregnant women, children under 8, adults with dependent children, the elderly, the differently-abled, and the blind. Throughout its history, a majority of Medicaid’s beneficiaries have been women.  Under the ACA, states now have the power to expand Medicaid eligibility to include all Americans with incomes below 138% of the federal poverty level. Medicaid expansion increases access to insurance, and as a result, lowers health care costs. A new report issued by the US Department of Health and Human Services projects that the ACA will save hospitals $5.7 billion this year. The majority of those savings – close to 75 percent – will be in states that have expanded Medicaid.

An earlier study by the George Washington University published in May found that 2.9 million patients utilizing community health centers in states where Medicaid was expanded had obtained health insurance in 2014. Community health centers receive federal funding to operate in under-served and typically poorer communities, although some have already been forced to close due to lack of funding and the rest risk losing $569 million in revenues if their states do not expand Medicaid eligibility. The same study found that over 1 million low-income Americans were struggling to access affordable health insurance specifically because of their state’s failure to expand.

27 states and Washington, DC have already expanded Medicaid, leading to an over 15 percent enrollment in the program in those states. There is no deadline for states to opt in to Medicaid expansion under the Affordable Care Act, and eligible individuals can enroll at any time.