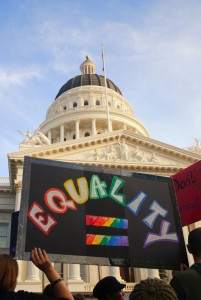 The United States Supreme Court will decide if they will take a case regarding same-sex marriage in a closed meeting this Friday. The Court is considering seven potential cases that challenge either the federal Defense of Marriage Act (DOMA) or Proposition 8, California’s controversial ban on same-sex marriage that made national headlines.

Cases being considered range from the inclusion of same-sex partners on federal and state health insurance policies to Social Security benefits to the basic legal right to marry. The Supreme Court has discussed taking these kinds of cases before, but the meeting on Friday suggests that the Court may see a case within the next year. For a case to appear before the Supreme Court, four judges must vote in favor of taking the case. It is possible that none of the cases will appear before the court if there is not enough consensus to get four votes.

Lambda Legal Executive Director Jon Davidson told the Huffington Post, “I don’t think we’re ever had an occasion where the Supreme Court has had so many gay rights cases knocking at its door. That in and of itself shows how far we’ve come.” Lambda Legal is representing one case challenging DOMA that will be considered on Friday.

After the conference on Friday, the court could announce which cases have been accepted as early as that afternoon. Otherwise, the decision will become public on Monday morning when the court will release the order list detailing its actions during the conference.