Walking on a rainy day on Kabul’s streets is harder than climbing a mountain in the winter. I walked along Dashti Barchi, where the mass of protesters began marching, holding high above their shoulders the coffins of the seven innocent Afghan Hazara people beheaded by ISIS. I felt the frustration and anger reverberating through Kabul’s streets. I felt the strength and unity of the people. I felt the horror of the loss of seven innocent lives. There are many ways to look upon this large protest, which people have come to call “Tabassom’s Revolution,” named after the nine year old girl, the only child who was among the beheaded. 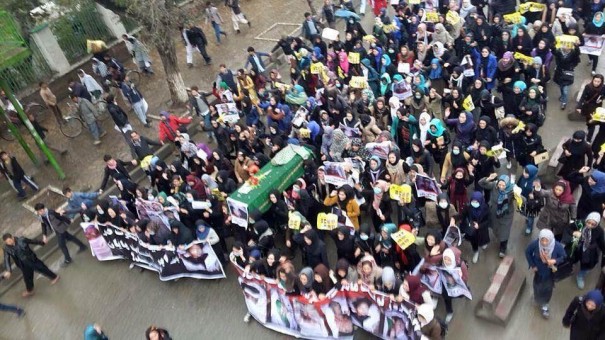 First, this revolution is not solely about one ethnic group, the Hazaras. When the revolution broke out in the north of Kabul, it was expected to draw people from all sides of the city and from all ethnic groups. When the bodies entered from Ghazni province, a procession of one hundred cars was seen following the coffins. It was a night when even Kabul’s sky was crying; a night when the anger started taking shape. One could feel proud to be part of this night, while another could feel angry and scream for change. Hamid Raustami, head of the Justice Seeker Human Rights Organization in Afghanistan, said, “I wanted to be part of this protest from the beginning. I started the night before. I am a Sunni Afghan, but I wanted to prove that we are all one.”

Revolutions can be defined in many ways. Sami Darayi, a life-long activist and humanitarian in Afghanistan, blames the government for not keeping its promise to the people of Afghanistan. Darayi is one of the organizers of this protest who, alongside many other Afghans, “finished the 13km distance walk in order to get to the presidential palace.” As he followed the movement to its final destination, he was inspired by the courage of the multitudes of women and youth who were so passionately involved. “Women were the crucial participants in this revolution,” Darayi confirmed, they “screamed as loud as the rest of the crowd.” Darayi hoped the upcoming protests and the revolution taking shape in Afghanistan, spreads across the provinces. He believes that the Afghan people are evolving, as the level of education and acceptance of change grows among youth.

Second, this revolution does not only belong to the men of Afghanistan. Women participated and became part of a historic movement. In fact, this movement would not be possible without the inclusion and involvement of women. As women broke the taboo of bearing coffins upon their shoulders and showed their strength, they repeated history: they bore Shukria Tabassom’s coffin like they bore the coffin of Farkhunda before her. The distance between Dashti Barchi and the presidential palace was far and arduous, yet women were a crucial part of this long-distanced march, holding the coffins overhead. Nadira Bakhteyari, one of the women holding Tabassom’s coffin, said, “it was a historic day in Afghanistan. Women were part of this movement where we were screaming slogans, men were repeating after us. The body of Shukria Tabassom and her mother were given to the women in the protest. I stood for four hours under their coffins.”

This is not the first time men and women have been beheaded and killed in Afghanistan. This is not the first time that the people have been frustrated, and this is the not the first time men and women have worked together to build a better Afghanistan. I am certain it will not be the last time either. Those who are living outside the country, those who are merely reading the newspapers and watching the news on TV, may not be able to feel the positive changes that have occurred in Afghanistan over the past 14 years. Protests, movements, and revolutions are signs of progress, the practices of modernity, and the bearers of revolutionary ideologies that lead people to pour onto the streets and call for justice and change. Afghanistan will only change for the better if the educated people, particularly the youth and women, take part in the movements and decision-making processes that shape the country’s future.

Women and youth in Afghanistan are not the same as they were many years ago. They think differently and yearn for change. This protest has shown that different ethnic groups, different ideologies, and different people can came together to make history, and that women can be part of it. The beauty of these movements is their very diversity: different people with different beliefs and backgrounds, all coming together and holding hands, so that they can prepare Afghanistan for a greater future.