The Feminist Majority Foundation has just pulled our annual Global Women’s Rights Awards, co-chaired by Jay and Mavis Leno, from the Beverly Hills Hotel on May 5 because the hotel’s owner, the Sultan of Brunei, Hassanal Bolkiah, is imposing a Taliban-like Brunei penal code that includes the stoning to death of gay men and lesbians and the public flogging of women who have abortions. This code is set to go into effect in three stages – beginning tomorrow, May 1.

We need your help! Take action now to stop the imposition of these Taliban-like laws. 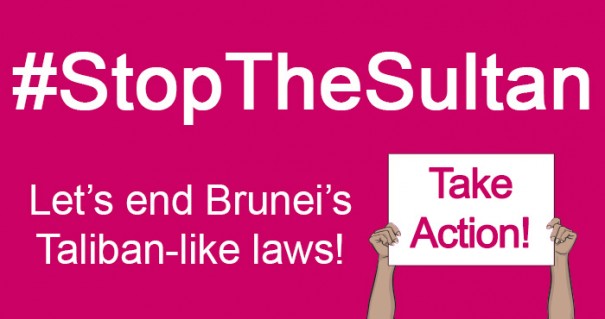 FMF has joined with gay and lesbian groups in protesting this gross violation of human rights – and we will hold a rally across from the Beverly Hills Hotel, in the park on Sunset Boulevard, at noon on May 5 calling on the Sultan to rescind this new horrific penal code. Please join us at the rally if you are nearby! We have also moved our Global Women’s Rights Awards to Hammer Museum in Los Angeles (Westwood). It will take place in the evening on May 5.

The Office of the United Nations High Commissioner for Human Rights has expressed deep concern about the new Brunei penal code and stated that such draconian punishments would contravene international law and international human rights.

Please immediately reach out to the Sultan, the Brunei Embassy, the US Ambassador to Brunei, and the United Nations Secretary-General demanding that this new horrific Brunei penal code be rescinded.