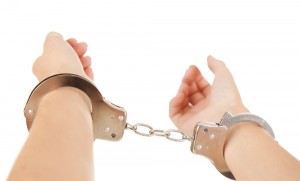 An 18 year old high school senior in Florida was charged with a felony and expelled from her school for a consensual same-sex relationship with a 15 year old classmate.

Kaitlin Hunt was arrested in February and charged with “lewd and lascivious battery on a child 12 to 16” after the parents of her partner filed charges against Hunt. According to Hunt’s mother, Kelley Hunt-Smith, “These people never came to us as parents, never tried to speak to us… and tell us they had a problem with the girls dating…They were out to destroy my daughter. [They] feel like my daughter ‘made’ their daughter gay.”

Hunt and her partner were both on the Sebastian River High School basketball team and in some classes together. Hunt-Smith maintains that the two had completely consensual relationship. According to the Free KateFacebook page, “Kaitlyn’s girlfriend denies that Kaitlyn ever pressured her and is adamant that their relationship is entirely consensual, but her parents are out to destroy Kaitlyn’s life.” When the basketball coach found out the two were dating, Hunt was kicked off the basketball team and the coach notified the other girl’s parents, who pressed charges. Hunt was able to remain at Sebastian despite repeated efforts by her partner’s parents to have her expelled. When they petitioned the school board, Hunt was expelled from school despite two judges and the school’s administration denying their previous requests.

The State Attorney, Brian Workman, has offered Hunt a plea deal. If she accepts, she will face two years house arrest and one year probation. If she does not accept, she could go trial and if found guilty become a registered sex offender. She must decide whether or not to accept the offer by Friday. Her family has also created a petition on change.org that received so much traffic it crashed the site.

Woman hands with handcuffs on the white background from Shutterstock