Some 18 years ago, the Feminist Majority began what many thought was a hopeless fight to end a brutal system of gender apartheid in Afghanistan. Despite the odds, activists joined the Feminist Majority in speaking up and leading a successful fight to stop the US and the UN from recognizing the Taliban as a legitimate government. 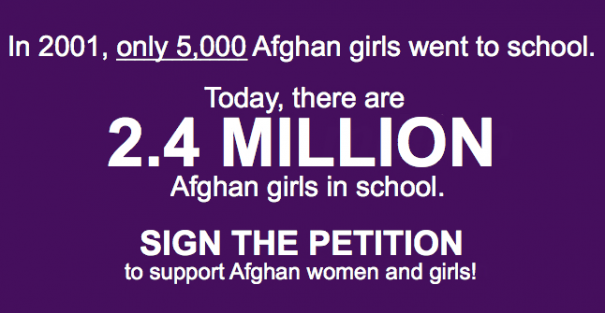 President Obama is right now reviewing his decision to withdraw 5,000 U.S. troops from Afghanistan by the end of 2015 and ALL troops by the end of 2016. But pulling all support troops is dangerous for Afghan women and girls, and they have come too far to have us turn back on them now. If the Taliban returns, too many of the women who have gone to work and school and who have taken on leadership in government or in the several hundred established Afghan women’s groups, will be killed. We must stand shoulder-to-shoulder with these courageous women.

Some Americans want the US to leave Afghanistan – to pull the last 10,000 support troops who are helping the new Afghan unity government, the Afghan army, and the police to provide security in the face of the terrorist tactics of current Taliban forces and new threats from ISIS.

Many Afghan women leaders as well as other Afghans are saying their number one concern is security, and they want the remaining US support troops to stay. This is no time to leave Afghanistan completely when women and girls are making progress and the new unity government, pledged to women’s empowerment, is trying to move forward. The new leaders have signed a bilateral 10-year agreement with the US – why provide aid without providing some security at this critical time?

Click here to sign the petition to tell President Obama, Secretary Kerry, and Congress that the U.S. must not abandon Afghan women and girls who need and want security. Let’s help Afghan women protect the gains they have won.