TIME has decided to include the word “feminist” in its annual “worst words” poll, alongside words like “bae,” “basic,” “turnt,” and “yaaasssss.” And we’re not buying it. If you’re not either, sign the petition. 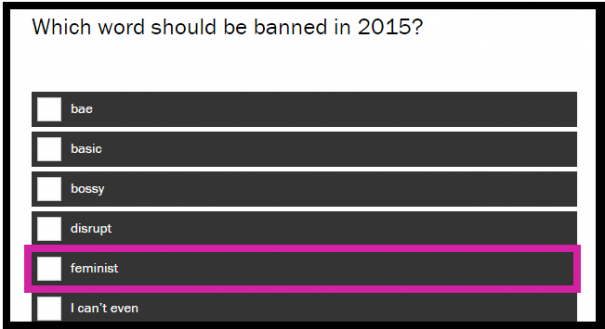 “Feminist” is an important word, not a meme. In fact, millions of women and men around the world who believe in the social, economic, and political equality of all women identify as “feminist” – including Taylor Swift, who is currently on TIME’s cover. So we don’t really care if the word makes a few people at TIME “cringe,” or if celebrities publicly coming out as feminists annoys them. Actually, we think it’s about time so many people are talking about feminism and how to achieve equality.

If TIME is annoyed with a word that represents saving women’s lives, fighting for equality, and ending violence against women, then there’s something wrong with TIME – and not with the word “feminist.” Tell TIME that “feminist” is not their word to ban.