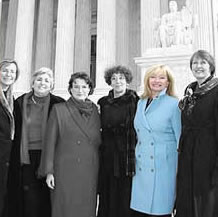 When Susan Hill was operated on for breast cancer several years ago, she didn’t recognize the name nurses called out as she emerged from anesthesia.

“That’s because I was admitted under an alias,” she recalled last year, shortly after her longtime friend Dr. George Tiller was murdered by an anti-abortion extremist. The alias was necessary because a threat against Hill’s life had popped up on the Internet the day before her surgery.

“That’s how you’re forced to live—sort of in a box,” said Hill, speaking of herself as well as other abortion providers nationwide who continue to offer a full range of reproductive options to women despite harassment and terrorist acts. “But you also have to get up and live your life. I refuse to live in fear. I refuse to be intimidated by them. I need to do two things: survive cancer and get these guys [the anti-abortion terrorists]. I think god kept me alive so I could go after these guys!!”

Hill, 61, succumbed to the disease on January 30 in Raleigh, N.C., courageous to the end. Her colleagues haven’t skipped a beat, continuing her work to provide safe abortions, but she will certainly be missed by those in the reproductive rights movement who have counted on her steadfast commitment since Roe v. Wade became law.

She began working as an abortion provider just two weeks after the Roe decision was announced in 1973. “I tell people I still remember what I was wearing and who I was talking to that day [Roe came down],” she recalled. “I was a social worker in a hospital. I saw women coming in hemorrhaging from illegal abortions. Once you see that, you don’t want it to happen again.”
A doctor she knew immediately opened up a clinic in Florida and she became its director of counseling, then overall director. After 1975 she decided to open other clinics as well. “I came from a small city in North Carolina, and I wanted to give access to women in smaller towns, smaller states,” she said.

In 1977 and 1978 she was able to keep open as many as 11 clinics. Anti-abortion protests were light during the Nixon and Carter presidencies, but when Ronald Reagan became president in 1981 and the Christian Right began its anti-abortion crusade, once-peaceful protests took on a more ominous tone. Her clinics began to experience arsons, firebombings, countless vandalism and invasions. One militant anti-abortion protestor who torched Hill’s New Jersey clinic came back to repeat the act two weeks later because it hadn’t been completely destroyed.

“It was a game of war,” is how Hill described those times, during which she filed 34 federal or state lawsuits against protestors. “There were days when we had 1000 protestors in front of a 1700-sq-ft. building in Ft. Wayne, Ind.” In 1993, one of her clinic doctors, David Gunn, was the first provider to be assassinated by an anti-abortion extremist.

If the stakes weren’t already high enough, Hill and other abortion providers have also had to face constant legal battles aimed at limiting abortion access. “Our opponents have been very good at restricting everything they can,” said Hill. “We’ve done a poor job of explaining to the public just how restrictive it is. It’s our fault—but we were busy. We were being shot at, and had people to treat.”
After Tiller’s clinic, one of the few venues offering late abortions, was closed following his murder, Hill quietly talked with other providers about a possible network to provide late abortions in several locations around the country. “In some ways I think it’s better to spread the services out as opposed to having one focal point,” she said. “We’re not going to give up.”

Comments on this piece? We want to hear them! Send to letterstotheeditor@msmagazine.com. To have your letter considered for publication, please include your city and state.