UPDATE – Wednesday, September 19: The Chicago Teachers Union voted yesterday to end their strike and agreed today to a tentative offer put forward by the city of Chicago.  The agreement includes, among other things, an increase in pay for teachers, shorter school days, increased funding for music, art, and physical education classes as well as for textbooks and school supplies, and a change to the process for teacher evaluations with less weight placed on standardized test scores.  In response to the agreement, CTU President Karen Lewis stated, “We feel very positive about moving forward. We feel grateful that we have a united union, and that when a union moves together, amazing things happen.” 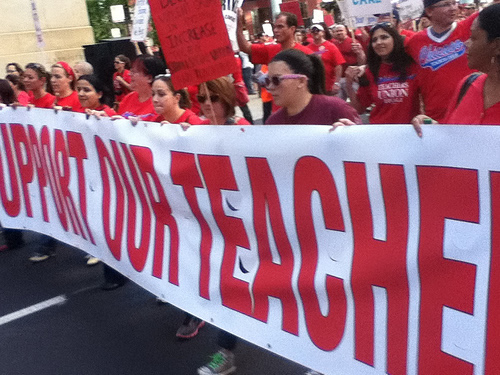 It all began Monday, when tens of thousands of people – teachers, parents, children, and community supporters – all dressed in red, flooded downtown Chicago’s streets while others marched in picket lines in front of schools. For the first time in a quarter of a century, the nation’s third-largest school district is on strike.

It is now Day 3, and with over 26,000 teachers on strike, what is being minimized by many into a dispute over teacher contracts has become much more – a growing movement in the struggle over public education and labor unions.

The Chicago Teachers Union (CTU), the oldest local of the American Federation for Teachers, has been without a contract since June, and 98% of teachers had agreed to strike if the city did not come to an agreement with the union by the beginning of the school year. Before the contract disputes, teachers were being forced to work longer hours, imposed by Chicago Mayor Rahm Emanuel, and before that, the Illinois state legislature passed laws that made it more difficult for unions to strike. A school social worker on the bargaining team, Susan Hickey, said “Chicago is a union town, and the assault on unions has been horrible.”

The rough climate for unions today has only been exacerbated for CTU and other public school teachers by austerity measures imposed nationwide, which have led to massive layoffs, increased class sizes, shrinking social services in schools, and school districts unwilling to boost teacher salaries.  CTU members and many others argue that Race to the Top, a policy adopted in 2009 by the Obama administration, has caused them to rely too heavily on ineffective teacher evaluations and standardized test scores without considering outside factors, such as student poverty, and places undue burden on teachers to standardize their education in an effort to maintain their employment.

The Associated Press reported from the strike. Frank Menzies, a teacher for 15 years at Jones College Prep, notes that “equity, fair labor practices and dignity” are what’s at stake in this strike. “Money is not a big deal,” he said. But Illinois state laws prohibit teachers to strike over issues other than pay and benefits, and while this is certainly a part of the issue, teachers are making it clear that they’re also striking over class size, more education options, and decent facilities (one teacher noted that what she wanted most was an air conditioner for her students).

Karen Stolzenberg, an art teacher for 25 years, said that her classes average 32 students, making it “hard to build a relationship with students on a daily basis,” she said. “None of us wanted this [strike], I want to be in the classroom, but this is important.”

Chicago Mayor Rahm Emanuel denounced the strike in a press conference yesterday, saying it is “one of choice” that could have been avoided if the teachers “were more reasonable.” And the school board agrees with him – not a big surprise, since the board was hand-picked by Mayor Emanuel, and largely made up of CEOs, financiers, and real estate developers.  Mainstream media aired Emmanuel’s statements last night alongside angry parents who wanted their children in school, and police officers stating there would be higher rates of crime because of the strike. 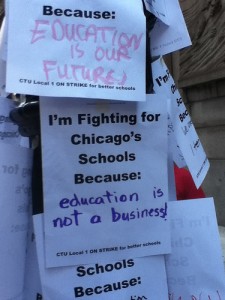 But perhaps the backlash is because the strike is hitting on a nationwide cord. Although some may see this as union leadership calling the shots, this is very clearly a situation in which rank-and-file union members are organizing and mobilizing their communities, taking a stand for a better education system. There is national excitement here –   the power and energy behind it show this strike as potentially sparking a social movement.

The strike reflects our changing education system, where “bad teachers” are routinely blamed for a failing education system  rather than policies that take away funding for public schools and then turn around and condemn it for failing.  Where a growing reform movement that seeks to expand charter schools leads them rapidly rising in number throughout the country.

We are seeing government officials and corporate CEOs find common ground in charter schools, as education becomes the new terrain for privatization. The Chicago teachers strike reflects a growing response to crippling austerity measures through education reform, and calls for new policy that reflects the priorities of better working /learning conditions and quality education over than corporate greed. CTU is setting an example for teachers unions across the country for how to resist attacks on our public schools, and it has quickly become more than a battle for Chicago, but for the whole nation.

We should all join in and show our support for the teachers’ union in Chicago and for our teachers fighting for public schools in our own communities.  In the meantime, Chicago children are learning firsthand from their teachers how social movements begin.  Seventh grade teacher Rick Sawicki told the Chicago Tribune. “This is an amazing display of democracy. It’s a wonderful lesson for children and adults alike. I’m honored that we are all sticking together.”

Tweet @CTULocal1 and use hashtag #FairContractNow to show them your support.