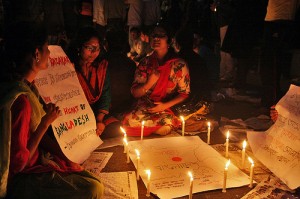 It is over a week now that crowds refuse to die down in Shahbagh Square in the heart of Dhaka, Bangladesh.

While most of the “western media” has either ignored the swelling numbers of ordinary Bangladeshis joining the movement, others have wrongly labeled it as a mass demand for capital punishment.

This is perhaps the biggest misconception about what is happening in Bangladesh right now, that these historic protests are somehow a stamp of the public’s thirst just for capital punishment. Could anything be more incorrect or insulting?

Earlier this week, I wrote about how Bangladeshis joined in rare solidarity to demand the death penalty for the leader of the country’s largest Islamic party, Jamaat-e-Islami, well-known war-criminal, Abdul Quader Mollah. His sentencing to life in prison triggered Bangladeshis to put aside their political differences, and unite against Mollah.

Why were so many people coming out in droves in Dhaka, gathering in this square in peaceful protests, holding signs of the hangman’s knot? The scary slogans made the people holding them look like savages, instead of the man pictured, who Bangladeshis believe escaped the real sentencing he deserved.

What we are seeing in Bangladesh right now is not about capital punishment. The world needs to understand that. It is wrongly labeling all Bangladeshis as bloodthirsty people. I do not support capital punishment and yes, we all know the War Crimes Tribunal in Bangladesh is heavily flawed. It even has been accused of being nothing but a political tool for Prime Minister, Sheikh Hasina.

But the Shahbagh movement goes beyond both these points. I resent people dismissing this as a movement for capital punishment when what is happening in Bangladesh right now is much more complex. Why is the fate of Shahbagh linked to the destiny of every single Bangladeshi? Bangladeshi writer, Tahmima Anam explains:

…The call for Mollah’s death is about more than revenge. He committed his crimes during Bangladesh’s nine-month struggle for independence from Pakistan in 1971. In addition to the perceived inadequacy of the sentence is an abiding anxiety about the way it will be carried out. It is ingrained in the public imagination that justice always takes second place to political expediency. Mollah knows that if his party or its allies were to come to power again, he would almost certainly be freed. That is why the protesters at Shahbag are calling for his death: it is the only way they can be sure the episode will come to an end.

In my life, I have never seen an on-going protest of this magnitude in Bangladesh ever that was not partisan. I have never witnessed people spill onto the streets for anything not somehow related to Awami League or Bangladesh National Party-led demonstrations or strikes.

The non-partisan nature of Shahbagh is not the only thing that makes it different, but the role technology is playing is revolutionary as well. It was Bangladeshi online activists and bloggers who first protested Mollah’s verdict, demanding the death sentence. They used social media to spread the word, and staged sit-ins. The “Shahbagh” Facebook page has over 6,000 Likes, and is being used as a weapon of  ”cyber war against war crimes.”

The participation of youth and women also make Shahbagh unique. The protests’ female factor- students, wives, working professionals, activists, and mothers with their children all gave their voice to the Shahbag protests.

I find this electrifying. Although Bangladeshi women play a huge role in our country’s government and civil society, they also played a huge role in the 1971 Liberation War, not only as fighters and supporters of the war, but as the people who perhaps paid the greatest price as Bangladesh seceded from then West Pakistan.

Many academics state that the first time rape was consciously applied as a weapon of war was during the Bangladesh War of Independence, and although the official numbers of the women raped are 200-250,000 many experts put that number closer to 400,000 women and girls who were raped, mass-raped, imprisoned for months in notorious rape-camps.

It is only fitting that today, almost forty-three years after Independence, that the mothers, daughters and sisters of our martyrs make sure the memory and spirit of those who freed Bangladesh is honored. They are organizing in the streets with their children, because at the end of the day, as Egyptian feminist author Mona Eltahawy states, what revolution worth anything did not have “gender nestled in its beating heart”?

Will Shahbagh succeed or will it fade? Will it bloom like the water lotus, or wither with time? One thing is for sure, the nation’s largest movement in twenty years has already changed the political landscape of Bangladesh forever.

*This post of mine was also published in Forbes Woman and in Anushay’s Point.