By Samantha Horsell and Michelle Hutchins 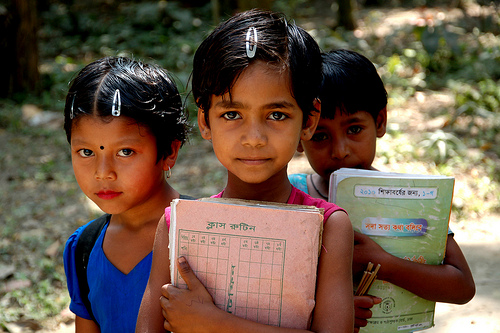 While everyone is consumed in the upcoming election and “women’s issues”, there is yet another disturbing threat at large—the global war on women.  The global war I’m thinking of goes beyond reproductive rights to the basic necessity of living free of fear.  Last week Malala Yousafzai’s shooting grabbed the world’s attention.  Her suffering on account of her desire to attend school put into perspective the violence girls and women face as they exercise their basic rights.  Sadly though, her story is only one of many involving terrorization.  Every day women are subjected to intimidation all around the world, and ironically this violence seems to be directly related to their access to basic rights.

Despite Bangladesh’s golden veneer of economic success, there is an underlying corrosive level of violence against women (VAW) occurring at alarming rates.  Bangladesh is considered one of the most up and coming nations and even a “model of progress”, yet their matters of gender equity and empowerment still lag behind. Official statistics reveal that gender violence in the nation “continues unabated and many complaints are dismissed without justice”.  Salma Ali, executive director for Bangladesh National Women Lawyers’ Association (BNWLA), cites a key challenge in women’s rights advocacy is “the fact that Bangladeshi society is strongly patriarchal”.

But I have to wonder, isn’t there supposed to be less violence when there is progress towards equality?

Threats against girls and women serve as an indicator of patriarchal power and control within the culture.  The more power granted to women by their governments, the more severe the social backlash is.  The legislation threatens the authority men maintain over women.  Farida Akhtar, a recognized rights activist, stated “when women are better aware of their rights though education, and want to assert them, they suffer violence.”  Women want to learn, they want to go to school. Is securing their safety too much to ask for?  Evidently, it is.

However, the empowerment of women can only go so far.  They need more than just words on paper.  Women need to be able to trust that their legal system will grant them justice when they become victims of their culture clashing with the rights granted to them.  The BNWLA reports that out of the rape cases is 2011, only 286 out of the 420 recorded were prosecuted.  “Due to better awareness female victims have learnt to raise their voices, but stop short of seeking police help.  During our 20 years of experience on VAW we have found that police often do not cooperate with victims and favor the accused,” stated Afroza Parvin.  Parvin is the executive director of Nari Unnayan Shakti, a women’s rights non-government organization founded in Bangladesh.

The situation in Bangladesh is not unique.  All across the world women are being denied justice for the crimes they endure.  As the recent documentary Half the Sky discussed, once these inequities are remedied, meaningful progress can be made.  As Gloria Steinem discussed at the Ms. Magazine 40th Anniversary Luncheon, social justice movements take time to be “absorbed into the culture and understood to be normal and natural”.  It will take time for the culture to catch up with legislation, however, women must be served on the ground within their community in the meantime.  Cooperation is a necessity if there is any hope of justice for women.

This goes far beyond women.  As the central thesis of Sex and World Peace explains, “the very best predictor of how insecure and unstable a nation is…the level of violence against women in a society.”  Women’s safety is not negotiable, and neither are their rights.

So what do these nations have to lose?