Nearly 6 million people in the United States will not be allowed to vote in the upcoming presidential election for one reason.

As the November election nears, voting rights have become an important topic of conversation. From photo ID requirements to early voting restrictions, the negative effects of barriers to voting are being foreseen, not only in the way they affect outcomes of local and national elections, but in whose voices are being silenced. We see those of young people, old people, black people, women, and the poor being silenced quite often by the very people who seek to make laws that restrict their rights.  But who are we forgetting? Who is the most silenced and marginalized of them all? 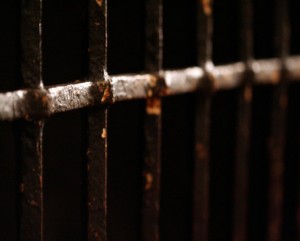 Prisoners. Felons. Criminals. What do these words mean? The American lexicon and legal system don’t afford much respect or hope – once you’re labeled a criminal, you’re a criminal for life. Our media and legal system have painted criminals as disposable, people whose voices and bodies are not a necessary or desired part of a functioning society.  They are locked up, invisible to the rest of us.  Often our only concept of them is through the nightly news or crime investigation TV shows.  So who are they?

But these are constructed images. White people commit crimes at much higher rates than people of color, and yet, people of color, or more specifically, young black men, are arrested and subsequently sentenced and locked behind bars at far higher rates. From discriminatory stop-and-frisk policies to mandatory minimums and discriminatory sentencing, the prison-industrial-complex is a racial caste system that serves to not only lock black people behind bars but also put them at a disadvantaged position for the rest of their lives. On top of the near impossible of task of finding employment and housing and being excluded from access to any government benefits, once you’ve been released from prison you’re also told that your voice doesn’t matter in our democracy.

5.85 million people will not be able to vote in this year’s presidential election because they have felonies on their record. And only a quarter of these are actually in prison.  This means that about 4 million people who live and pay taxes in their communities cannot vote in those communities. And nearly 1 million of these ex-felons are African American.  7.7% of black adults (13% for men alone) are disenfranchised, compared to 1.8% of whites. In the states of Florida and Virginia, two key battleground states in national elections, the rates of African American felon disenfranchisement is at its highest, where 1 in 5 African Americans cannot vote.

The 15th Amendment to the U.S. Constitution states that “the right of citizens of the United State to vote shall not be denied…on account of race, color, or previous condition of servitude.” But during the Jim Crow era, African Americans were denied the right to vote through poll taxes, literacy tests, grandfather clauses, and felon disenfranchisement, all of which were formally race-neutral and therefore found a loophole to the 15th amendment. Since then, all of these devices have been eliminated – except for felon disenfranchisement.

Michelle Alexander writes in her book The New Jim Crow, “The failure of our legal system to eradicate all of the tactics adopted during the Jim Crow era to suppress the black vote has major implications today. Felon disenfranchisement laws have been more effective in eliminating black voters in the age of mass incarceration than they were during Jim Crow.”

Nearly half of the total disenfranchised population is made up of ex-felons from 11 states. These are states with particularly devastating laws, in which those in prison, on probation, on parole, and even those who have completed their sentence have no option of ever being re-enfranchised. Once a criminal, always a criminal. In 19 other states, people who have completed their full sentence may be able to vote, but for many, there are waiting periods, fees (the new poll tax, as some have called it), and many other hoops to jump through. Only two states, Maine and Vermont, allow everyone to vote, including those in prison. In the rest, inmates only, or inmates and parolees, are prohibited the right to vote.

The nearly 6 million people without voting rights is even more dramatic when you consider that a little more than 30 years ago, that number was just over 1 million. The number of disenfranchised people has not increased at such rates because of harsher voting laws, but because of a dramatically rising prison population.  Did you know that the U.S. , which has only 5% of the world’s population, has 25% of the world’s incarcerated population? The U.S. prison population has increased exponentially since the 1970s when the “War on Drugs” was declared and a huge number of laws targeting primarily black men and black communities were put into effect, with devastating impacts. Of the 2.3 million people in prison in America right now, two-thirds of those people are there for non-violent crimes, the majority of which are drug-related.  The economic, social, and political exclusion of people who use drugs is antithetical to the concept of democracy. Is this what democracy looks like?

Can we really place the decision of who gets to vote (whose voice is valued) on this criminal justice system? A system that incarcerates more people than any other country in the world?

This election year, let’s talk about the ways in which our felon disenfranchisement laws serve to further marginalize and label as disposable the voices of the already most marginalized sectors of society. Let’s get to work on changing the laws in our states so that EVERYONE can vote. Maine and Vermont have it right. Let’s mobilize, contact our legislators, let them know any way we can that people convicted of crimes should still be allowed a voice in their communities. And let’s work to make re-entry into society a little bit easier, by breaking down the barriers to voting and making re-enfranchisement more accessible.

Let’s also begin a larger conversation around the very racist system of mass incarceration. As feminists who seek to dismantle the patriarchal structures that oppress women, we must see this fight as our own – working to end male dominance cannot come about without also dismantling white dominance and racial oppression, without working to destroy the hierarchy of power as a whole. Working to end mass incarceration IS a feminist issue, as is the fight to make voting accessible to everyone.

If there is any hope for a fair election this year, we must make sure that the voices of ALL Americans are heard.

For more information, check out the Sentencing Project, an organization that does a lot of great work around this issue.  Statistics included here are from their 2010 report on State-Level Estimates on Felon Disenfranchisement in the U.S.