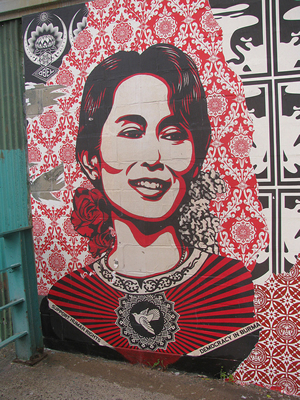 When I was growing up in Bangladesh, Burma’s Aung San Suu Kyi never ceased to amaze me. Burma is right next door to us geographically, but as a little girl all I understood about the military junta in Burma was primarily through pictures.

I just could not wrap my head around what kind of threat a tiny woman, with her iconic bright and colorful flowers, carefully and  always tucked behind her ear, posed to these big men with guns. Clearly the military’s worries went beyond what Suu Kyi represented to them physically.

This woman personifies the heart and the spirit of the long winding road that Burma has had to democracy.

In my adult years, Suu Kyi’s imprisonment was constant, continuous, and lasted well over a decade. Forced to be a prisoner in her own home, Suu Kyi was world renown to be a fighter for the core principles of democracy. Nobody embodied the fight for a people to choose their government the way Burma’s Suu Kyi did. And it is clear that “The Lady” is not done fighting after her much awaited release in 2010.

The legendary former political prisoner, and perhaps one of the most famous hostages of our time, declared this morning her willingness to run for Burma’s Presidency stating, ”…As a political party leader, I also have to have the courage to be president. “

Suu Kyi went on to state that her political party will work to remove an existing clause in the Burmese constitution, barring her from the Presidency. Suu Kyi’s words signal a new era in a country which is still waking up from the tight grip of  five decades of military rule.

Could anything be more politically dramatic than witnessing the woman take the place of the very regime that placed her under arrest, separated her from her family, and barred her from taking office even after winning landslide elections? Aung San is arguably one of the most romanticized political figures of modern times.

However, is it what Suu Kyi is not saying that may be the most telling of the kind of leader she will be, beyond the borders of our imagination? In reality, how will “The Lady” rule? Burma’s ethnic minorities may hold some clues.

Religious and ethnic violence displaced almost 80,000 people from their homes beginning in June, and to make matters worse, neighboring Bangladesh has closed off entry of Rohingya refugees fleeing the violence in Burma.

Burma’s President suggested that the Muslim minority should be physically moved out of the country, while the Prime Minister of Bangladesh, Sheikh Hasina, stated that Bangladesh cannot help the Rohingyas. Bangladesh has even shut off foreign NGOs from being able to assist the thousands of people trapped between two countries, in desperate need of food and medical services. But it is Aung San’s silence on this issue that is particularly deafening. How can a woman the world has watched fight for her people against the might of a military junta for decades not have a word to say when an entire part of her country’s population is being violently attacked? It is shocking to say the least. It also makes us ponder what kind of leader Aung San will be, and exactly how different will her government be from the military rule that preceded it?

Why is the world being silent about Suu Kyi’s silence?  This is where the politics gets personal and begins to implicate all of us. When I first mentioned that I wanted to write about how Aung San has failed the Rohingyas, many people were shocked that I would “attack” a woman the world holds so dear. No one wants to hear anything bad about Aung San. We clearly have idolized this woman to the point of no return. We want to believe that the fight she waged for a ‘free’ Burma includes the Rohingya people as well.

It got me thinking that when it comes to women leaders, women in positions of power, we still tend to gender them. We do not want anything to taint the perfect portrait of grace and political sacrifice we have built in our hearts and minds of Aung San Suu Kyi. We imagined and worshiped her as a maternal political warrior, and that is how we want her to remain. Even if this can be a considered a positive stereotype, it still is a stereotype.

But staying silent as the war on Rohingyas rages on, as both the Bangladeshi and Burmese governments dust their hands of any responsibility is wrong, and cannot continue with impunity any longer.

There is no single figure who could draw the attention and create a solution to the crisis the way Aung San can. We have waited decades to see Burma’s Aung San Suu Kyi descend upon what we all believed was her rightful political throne. She even won the Nobel Peace Prize while in prison for her people.

And it just may be the Rohingyas who hold  the  key to the direction Suu Kyi’s political destiny will go in. And too many clues clearly lay in her silence on the situation so far.

Top photo via Flickr user by edenpictures and bottom photo via the World Economic Forum under Creative Commons license.