On Saturday, June 30, over 30,000 people gathered in Lafayette Square across from the White House to protest Trump’s policy of family separation and indefinite detention at the southern border. Hundreds of thousands of people marched nationwide in sister marches in over 700 different cities. 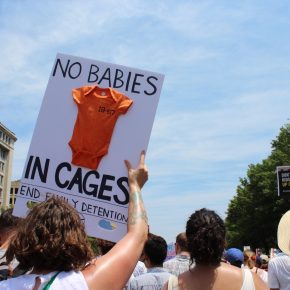 Protesters marched down Pennsylvania Avenue, past the White House, demanding that Trump reunite the families he separated. They then marched around the Justice Department, leaving signs in front of the building. 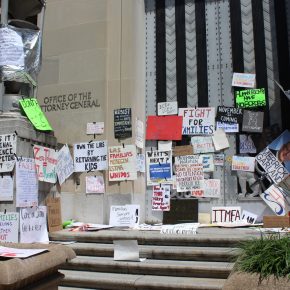 Feminist Majority attended the protest and was led by President Eleanor Smeal. 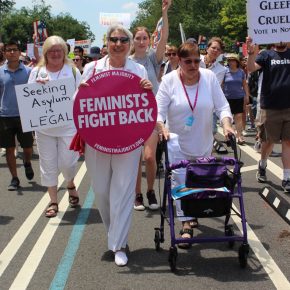 Protesters wore white as a symbol of unity. 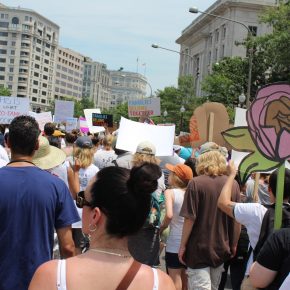 “I am here not only as a brand new mother, as the proud child of Honduran immigrants and an American who sees it as her duty to be here defending justice. I am here as a human being with a beating heart, who can feel pain, who understands compassion and who can easily imagine what it must feel like to struggle the way families are struggling right now,” Ferrera said. “It is easy to imagine that I would hope that if it was my family being torn apart, if it was my brother being arbitrarily criminalized, if it was my sister who was being banned, that someone would stand up for me and my family.” 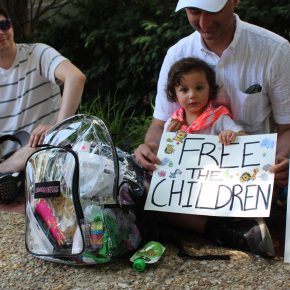 “We’re here because there’s parents right now who can’t sing lullabies to their kids,” Lin-Manuel Miranda said. “We’re not going to stop until they can sing to their kids again.”

In June Attorney General Jeff Sessions also reversed asylum protections for immigrants fleeing domestic or gang violence, and implemented the Zero-Tolerance immigration policy, which resulted in the separation of thousands of children from their parents at the border. The policy was designed to deter immigrants from coming to the United States. After public outrage, Trump ended the family separation policy, but allowed these families to be detained at the border indefinitely.