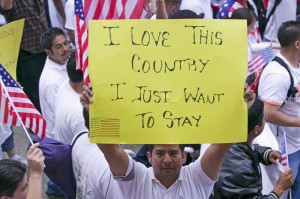 Yesterday, thousands of people rallied in front of the Capitol in Washington, DC, in favor of comprehensive immigration reform that includes a path to citizenship for those already living inside the United States.

The rally, called Citizenship for 11 Million, drew attendees from across the country to send a message to Congress and the White House that immigration reform must include a path to citizenship for 11 million people who are currently in the country illegally. Attendees held signs in English and Spanish saying “The Time is Now!” as well as shouted chants like “Si se puede!” Others held American flags and flags of their home countries or nationalities.

For many, the rally was personal – directly involving family members. One attendee who held a sign “I am a Deported Man’s Wife” told ABC News, “When [my husband’s] deportation happened in 2001, people were protesting, but not in the national dialogue the way it is now, so it is deeply emotional for me… I’m not putting any hopes on seeing the reform that I would like, but at least these people are engaged in the dialogue.”

Meanwhile, the Gang of Eight, a bipartisan group of eight senators working on immigration, were originally supposed to introduce their legislation this week. However, they announced on Wednesday that the introduction would have to be delayed to make room for the gun control debate. But Senator Robert Menendez (D-NJ) took the time to speak at the rally. He addressed the crowd, “[Immigration reform] is in the nation’s interest, in the economic interests of the United States and in the security interests of the United States.”

Man holds sign saying “I love this country” in march for Immigrants and Mexicans protesting against Illegal Immigration reform by U.S. Congress, Los Angeles, CA, May 1, 2006 by spirit of america / Shutterstock.com