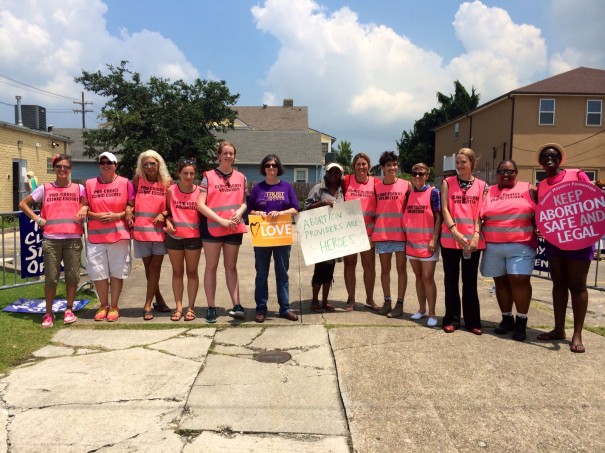 Roy McMillan was found guilty for obstructing the sidewalk entrance to a Mississippi clinic. McMillan is already subject to a federal injunction that bars him from entering a certain radius of the clinic. Harriett Ashley was found guilty for obstructing the sidewalk entrance of the abortion clinic and for failing to obey a police officer. Ashley cannot attempt to make contact with the clinic or use the clinic sidewalk. Chet Gallagher was found guilty for interference with a lawful business. Gallagher was also barred from making contact with the clinic and charged a $500 fine. Charges against Cal Zastrow, a fourth defendant and anti-abortion activist, were dropped last night.

The Feminist Majority Foundation’s National Clinic Access Project (NCAP) Executive Director, duVergne Gaines, was in Jackson City Court last night for the proceedings. “This was a huge victory,” Gaines said. “These extremists were held accountable for obstructing access to the last remaining clinic in the state of Mississippi, the Jackson Women’s Health Organization,” she said. “They have, literally, laid siege to this facility for the last two years since we learned its fate was in jeopardy because of Mississippi’s TRAP law.” Gaines continued, “We’re thankful for the police department’s vigilance in enforcing the law.”

Each of the convicted defendants has a notorious past in clinic aggression and intimidation. Chet Gallagher was fired by the Las Vegas, NV Police Department after participating in an Operation Rescue demonstration in uniform, using his uniform to gain access to a clinic, then destroying clinic property. Gallagher later served time in prison for those offenses. Another defendant is a supporter of justifiable homicide. Harriett Ashley has ties to anti-abortion extremists that have championed justifiable homicide of doctors, clinic workers, and supporters.

Over the past two days, NCAP has been training local volunteers, clinic escorts and legal observers countering the Operation Rescue/Operation Save America protests aimed at JWHO. Patients visiting the facility were able to safely enter the clinic despite dozens of anti-abortion demonstrators who staged a service outside of the clinic on Sunday.