4 AM: After fifteen years of trying to get a woman suffrage amendment on the ballot again, then months of hard campaigning up and down the State after the legislature agreed to put it there, the big day is finally here! All local suffragists are present and accounted for at Los Angeles suffrage headquarters, ready to make good on their pledges to work all through Election Day. The current campaign for woman suffrage in California ends when the polls close at 6 p.m. in what is hoped will be the State’s final “men-only” election.

Suffrage workers are now adjusting their sashes and buttons, and picking up literature to give out to voters when they take up their posts as near the polling places as legally permitted. Others have voter registration lists to assure that only legal votes are cast. “Votes for Women” pennants are now being attached to automobiles that will carry voters to the polls to assure a maximum turnout.

The final mass meeting of the campaign was held last night in Blanchard Hall, although it really only started there. The overflow crowd soon spilled into the streets, and finally reached City Hall, where the cheering suffragists were made welcome by Mayor George Alexander himself. The speech-making and applause went on for three hours at both locations and was just what weary suffrage workers needed as reassurance that their hard work was appreciated, and optimism justified.
6 AM: The polls have just opened, and all members of the Political Equality League’s Executive Board are now present at headquarters, and will stay for the next 12 hours to deal with whatever situations come up between now and the closing of the polls. Their legal advisers and most experienced campaign workers are also here, ready to go to any polling place at a moment’s notice. The “Votes for Women Club” will also contribute 100 workers to the 1,000 others doing similar duty. No anti-suffrage advocates will be promoting their cause near the polls today, according to an announcement they have issued.

9 AM: A brief drive around Los Angeles shows an almost continuous display of “suffrage yellow” along many streets. One portion of Eighth Street has outdone them all, with yellow on every house and telephone pole, so those who have spent the past few weeks delivering banners, posters and yard signs clearly made a real contribution to the cause, and the homeowners have had no last minute change of heart. 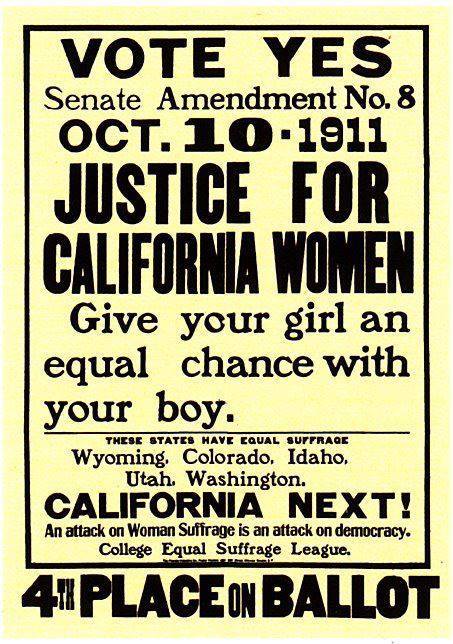 NOON: Polls of those exiting the voting booths taken by reporters for the “Los Angeles Record” show overwhelming support for suffrage. Amendment #8 seems to be getting approved right along with #22 (Initiative, Referendum and Recall), so this is shaping up as quite a year for political reform. Estimates of the size of the suffrage victory continue to climb. Some suffrage leaders are now predicting that the measure will carry Los Angeles County by 10,000 and the State by 20,000.

J.J. Petermichel, Secretary of the Men’s Suffrage League, has returned from San Francisco, and just said that notoriously anti-suffrage city will deliver “a safe majority” for suffrage this time. Straw polls taken here yesterday were also quite favorable. One was at the F. O. Engstrum Company, and at all the buildings they have under construction. The result was 576 employees for suffrage and 193 against. Though none of its members can vote today, a poll was also taken at the Woman’s City Club, resulting in 407 in favor of Amendment #8 and 20 against. Other such surveys have given favorable results of up to six to one.

6 PM: The polls have now closed, and the verdict is in, so there’s nothing left to do but wait until enough ballots have been counted to know what the voters decided. But at least we live in a modern era, so results can be phoned in from around the State or delivered by telegram, and immediately posted on chalk boards here at headquarters. A large stereopticon, projecting the latest bulletins on a screen will be used tonight by the San Francisco Chronicle to give the latest developments to the large crowds that will be gathering outside its office.

8 PM: The “landslide” predictions and high confidence of earlier today have now faded in the face of the first reports from the North. Alameda County has been lost, and though San Francisco was always expected to vote “no,” despite a brief surge of optimism earlier today, the votes counted so far are much more heavily negative than even the most pessimistic predictions. Apparently the political bosses and saloon owners did their work well. But the early returns show suffrage carrying by a five-to-four margin in Los Angeles County, though San Diego County may erase that, leaving only the small towns, farms and ranches to offset San Francisco’s big majority against suffrage. Fortunately, all three received a great deal of attention from suffragists during the campaign.

10 PM: The atmosphere has become increasingly gloomy as even worse numbers from the North come in. Many people – exhausted from months of work and a final frenzy of activity today – have gone home, realizing that even at best, the result will not be known for certain until at least tomorrow morning. But some remain, and leave no doubt that whatever the outcome of today’s balloting, women in California will eventually vote. Frances Noel, president of the Wage Earners’ Suffrage League, said:

If we lose, then what? Well, we’ll first take a real good rest, as any soldier would after a battle royal. After that we start anew, wiser for the defeat we suffered and happier for the better understanding that has developed among womanhood in consequence of our campaign. Defeat, to us, means greater victory for womanhood in the end.

Mrs. Simons echoed those same sentiments as she departed: “We need our strength for the new work, whatever it turns out to be.”

11 PM: Not a good sign. Harry Dean, field manager of the “antis,” just made a victory statement:

Indications point to the defeat of the suffrage amendment in the State by 10,000 or over … I think the great bulk of women are happy tonight. The suffrage workers should feel happy, for they have waged a great political battle; but the ‘anti’ women have waged a better one. They waged the kind of a battle that men admire, for, after all, it is the sweet women that we all want – leave the political pool for the men to wade in. I congratulate the women of both sides, for they have both won.

Others at the headquarters of the “antis,” such as Mrs. Caswell, said:

We have worked hard to prove that it is not best for women or the State that women should have the ballot. We tried hard to show the people that a majority of women do not want it and we are satisfied with the judgment of a majority of the voters. We sent no girls or women to the polls, as this is against our principles, and we are surprised to see how few women the suffragists were able to place on the firing line. This only goes to prove our contention that a majority of women are not interested in politics.

But there are still a lot of votes to be counted, and though the outlook is far from optimistic based on what’s come in so far, suffragists are not nearly as ready to give up as certain newspapers have been this evening. Even if this does turn out to be a loss, the end of the 1911 suffrage campaign will simply be the beginning of the victorious 1912 campaign. The Initiative, Referendum and Recall measure appears to be passing by a large majority, so it certainly won’t be necessary to spend 15 more years trying to get the legislature to put woman suffrage before the voters again because the people will be able to do it themselves at any time.

According to Lillian Harris Coffin:

I shall not believe we are defeated until I see the final figures. If we are, we will start right in tomorrow with greater determination than ever, and we will have another election as soon as possible, perhaps next November. Even though the votes do not seem to be coming in as favorably as might be, still none of us are by any manner cast down. Quite the reverse. We are delighted with what we have accomplished and we have learned a great deal during the campaign. Everybody connected with our cause made a good fight, and we have only praise to bestow on all our plucky workers.

I don’t consider we are beaten because the vote does not seem to tally our way. It is really only the result of our first effort. We are not going to start over again, because we have never stopped. We are just always moving toward victory. I, for one, am delighted with the fine campaign we have made. It was a splendid piece of work, and if it has not brought victory today it is the brilliant beginning of another campaign which will surely bring victory at the next election, and that election will not be so far away.

The offices of all suffrage groups will open at the usual time tomorrow morning, and the latest returns will be evaluated carefully. Whether that analysis results in conceding defeat this year then planning for the 1912 campaign or giving out a victory statement will depend on the results that come in overnight. But the battle for woman suffrage will go on under any circumstances and for as long as it takes.