February 3, 1944: Women serving their country through military service got a well-deserved salute from the Women’s Army Corps commander today upon her return from a 26-day inspection tour overseas.

Colonel Oveta Culp Hobby had nothing but praise for the ability and dedication of the troops she visited in England, Italy and North Africa. They have been performing every task given them extremely well, and are determined to stay until total victory is achieved. According to Col. Hobby: “I didn’t see a one who wanted to come home until it was over, not a one!” 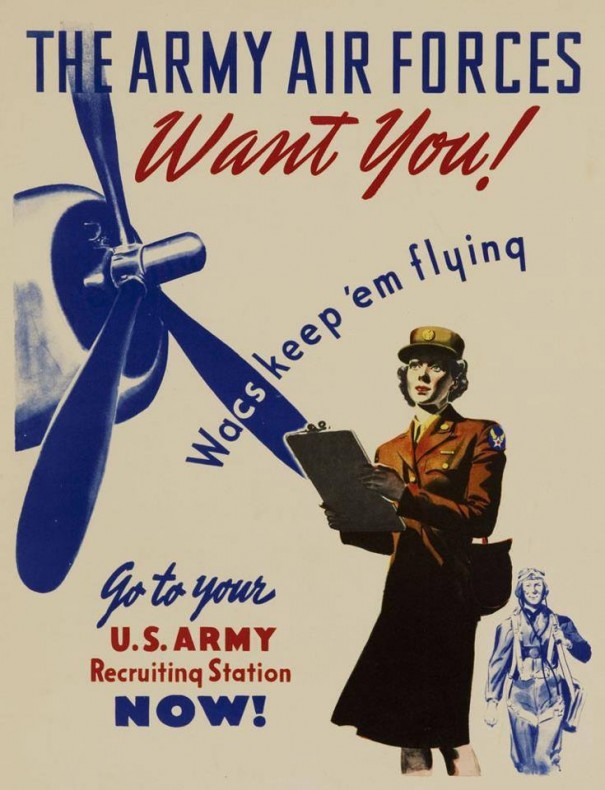 Though it’s not known when and where the expected Allied invasion of Europe will occur, the performance of our women soldiers has earned them a role in that operation. According to Hobby: “The W.A.C. will go in as soon as lines are established and field establishments set up.” Seven WACs are already serving with the Supreme Allied Commander, General Dwight D. Eisenhower.

Though the vast majority serve in the U.S., there are now about 3,000 WACs overseas, two-thirds in North Africa, 350 in Italy and the rest stationed in England. More are needed, and are on the way. Recruiting has been brisk, with 816 women enlisting in an average week. Like their civilian counterparts in defense work, military women are now doing a wide variety of jobs, as described by Hobby when she discussed their work by region:

England: WACs in England are scattered quite broadly. In London they are working in hospitals, in the Office of Strategic Services, in the Military Intelligence Service. In field installations with the various air commands they are plotting and briefing missions, doing photo interpretations of bombings, handling communications. We have not enough WACs in England yet; there are still British women serving with our American troops.

North Africa: I just happened into Algiers on January 26th, the first anniversary of the arrival of the WACs in North Africa. The 2,000 there have done so well there are many requests for more. The record of a year’s performance on overseas duty is the best evidence of how worthwhile the W.A.C. is to the Army.

Italy: In the forward field headquarters of the Fifth Army, I visited a camouflaged trailer, all manned by women who were running entire telephonic operations. The nurses, of course, were much closer up – our girls were not in range of the guns. The rest of the WACs attached to the Fifth Army were back in the next headquarters doing paper jobs.

The Women’s Army Corps was first championed by Representative Edith Nourse Rogers, Republican of Massachusetts, who began her campaign for it six months before the U.S. entered the war. But it was not until after Pearl Harbor that her colleagues got behind the idea, and even then, she had to overcome some vigorous opposition from the Southern men in Congress. But on May 15, 1942, the Women’s Army Auxiliary Corps was created, which became the Women’s Army Corps on July 3rd of last year.

Though a lot of territory has been re-taken from the Axis, this war is still a long way from being over. With so much left to do, we should all recognize and applaud the efforts of our men and women in uniform, whether those women are in the Women’s Army Corps or among the Navy’s WAVES (Women Accepted for Volunteer Emergency Service), Women Marines, or Coast Guard SPARs (from the Coast Guard motto of “Semper Paratus,” which means “Always Ready.”)