February 5, 1917: Margaret Sanger is in Brooklyn’s Raymond Street Jail tonight, beginning a 30-day sentence for the “crime” of giving out birth control information.

She shared her knowledge with women who desperately wished to have it, and could get it nowhere else but at what – until it was raided and shut down – was the nation’s first and only birth control clinic. 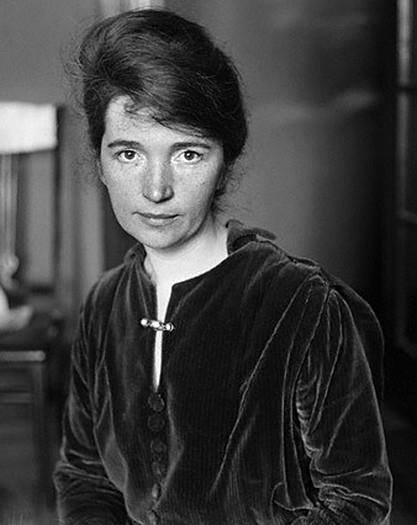 Three days ago Sanger was found guilty of violating Section 1142 of the New York State Penal Code by opening her clinic in Brooklyn on October 16th and operating it until it was raided and closed on the 26th. Sentencing came today, and she was first given the option of paying a $5,000 fine instead of serving jail time. After refusing to pay the fine, she was given another opportunity to avoid prison, but only if she would agree to stop sharing information about birth control as long as Section 1142 remains on the books.

Justice Freschi, who presided over the three-judge panel, seemed quite sympathetic, but still determined to do his duty to uphold all of New York’s laws, including its anti-birth-control statute. He said:

Mrs. Sanger, if you promise to obey the law faithfully in the future, this court will exercise extreme clemency.

This is a test case, and pending appeal only will I promise to refrain from my activities.

Agreeing to obey the law only during the appeals process proved insufficient, so Justice Freschi then addressed her lawyer, Jonah Goldstein, hoping that he could convince his client to agree to a deal in which she would apparently receive a suspended sentence in return for promising to stop counseling women on birth control until the law changes:

Mr. Goldstein, what is the use of beating around the bush? We are not prosecutors looking for blood. We are simply here to judge conservatively, with an eye for the whole people. In view of the physical condition of the prisoner and of appeals pending and other attending circumstances, we are inclined toward leniency … All we are concerned about is this statute, and as long as it remains the law, will this woman promise here and now unqualifiedly to respect and obey it?

The judge then returned to addressing Sanger, and indicated that he believed her to be a woman of principle. “You abided by the facts given the court as evidence,” he said. “You did not take the stand and attempt to perjure yourself. We will take your word if you will give it. Now, is it yes or no? What is your answer, Mrs, Sanger?”

Her answer – which was immediately followed by great applause and cheers from her many supporters in the courtroom – was: “I cannot respect the law as it is today.”

The judge then pronounced sentence:

Margaret Sanger, with the additional evidence submitted by the learned District Attorney after your case reopened last Friday to meet the claim that the proof was insufficient, there is now additional evidence that makes out a strong case that you established and maintained a birth control clinic where you exhibited to various women articles which purported to be for the prevention of conception, and that there you made a determined effort to disseminate birth control information and advice.

We are not here to applaud nor to condemn your beliefs; but your declarations and public utterances reflect an absolute disregard for law and order. You have challenged the constitutionality of the law under consideration and the jurisdiction of this court. When this is done in an orderly way, no one can find fault. It is your right as a citizen. Refusal to obey the law becomes an open defiance of the rule of the majority as expressed in this statute. I can see no good reason for all this excitement by some people. They have a perfect right to argue freely about amending the law, but not to advise how to prevent conception.

While the law is in its present form, defiance provokes anything but reasonable consideration. It is wholesome that we have discussion by citizens on matters that affect the welfare of citizens. People have the right to free speech, but they should not allow it to degenerate into license and defiance of the law. The judgment of this court is that you be confined to the Workhouse for the period of thirty days.

Sanger was taken to the Raymond Street Jail overnight, for transfer elsewhere tomorrow. She had been considering going on a hunger strike as her sister, Ethel Byrne, did when she was sent to the Workhouse on Blackwell’s Island. But she realized that such an action would isolate her in the hospital ward, away from the other prisoners. So, instead, she will use her month inside the prison system to investigate conditions there, which have been described as “outrageous” and in need of being exposed to the public.

Fania Mindell, convicted of selling a booklet by Sanger entitled “What Every Girl Should Know,” containing basic information about sexuality and reproduction, was fined $50 today when she came up for sentencing. The fine was paid on her behalf by Gertude Pinchot of the Committee of 100, organized to promote legalization of birth control and defend those prosecuted for breaking the present laws.

Forty-four years have gone by since the assault on birth control began when Congress passed the infamous “Comstock Act” of 1873, which classified birth control devices and information on how to use or obtain them as “obscene,” unmailable articles. States quickly went even farther, passing outright bans on birth control so strict that even giving out contraceptive information to anyone by any means became a criminal offense with serious penalties.

But thanks to some very courageous people, the issue of family planning is finally being debated out in the open, and public opinion is being mobilized in favor of reforming repressive laws from a previous century. The possibility that the courts will strike down, or legislatures will repeal, these laws now seems a quite realistic expectation. One sign that momentum is shifting to birth control advocates is that the Governor of New York agreed just a few days ago to appoint a commission to study how the law might be changed in his State to permit some practical, legal means of transmitting birth control information to those who want and need it.

Despite the progress made over the past few years, the road ahead still looks like a long one. It certainly will be an especially hard journey for those like Margaret Sanger and Ethel Byrne, who prefer prison to obeying an unjust law.

But however far in the future the end of State and Federal campaigns to suppress knowledge and promote ignorance about sexuality and family planning may be, the eventual outcome is not in doubt. The only question tonight is whether those who will be fortunate enough to grow up in a time when access to accurate information about sexuality, and effective methods of birth control are freely available will be willing to fight as hard to retain those rights as those who are battling today to establish them.