January 27, 1917: Force-feeding of birth control advocate Ethel Byrne at the Workhouse on Blackwell’s Island has begun, and will continue on a three-times-per-day basis.

She’s currently serving a 30-day sentence for violating New York State law by distributing contraceptive information at America’s first (and so far only) birth control clinic, which was raided and closed on October 26th, 10 days after its opening. 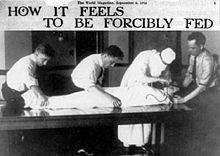 Hunger-striker Byrne had gone without food for four and a half days when prison authorities decided that her condition warranted this extreme form of intervention. Following an examination at 11:45 last night, doctors ordered her wrapped in a blanket and the feeding apparatus brought in. A rubber tube was inserted through her mouth into her esophagus, and a pint of warm milk, two eggs and a small quantity of brandy were poured through a funnel at the top of the tube. The procedure was repeated a second time at 2:30 p.m. with a sixteenth of a grain of strychnine added, then performed a third time earlier this evening.

There is great concern tonight as to Byrne’s true condition. Her sister, Margaret Sanger, has received reports that Byrne has been unconscious since early this morning, but prison officials deny this, and have been releasing updates showing her to be “improving.” Nothing can be verified because Commissioner of Correction Burdette Lewis has denied anyone other than the two staff physicians and two visiting prison physicians access to the prisoner.

“A thousand people in meeting assembled at Forward Hall, New York City, to protest against the continued imprisonment of Mrs. Ethel Byrne. You have a rare opportunity to prove your moral worth by refusing to be a party to the official starving to death of a woman.”

Today the Commissioner replied: “I am following your advice. We fed her last night at 11:45 o’clock.”

Another mass meeting will be held in Carnegie Hall on the 29th and Dr. Frederick Blossom, President of the New York City Birth Control League, said that at the meeting the first issue of the “Birth Control Review,” containing articles advocating birth control would be distributed. It is rumored that the police will try to stop any distribution of the publication. If they do, Blossom will appeal to the courts. So, the battle continues on many fronts!