April 17, 1943: While asking for even greater involvement and sacrifice by women in our war effort, President Roosevelt noted today that women have more reason than most Americans to want to defeat the Axis powers: 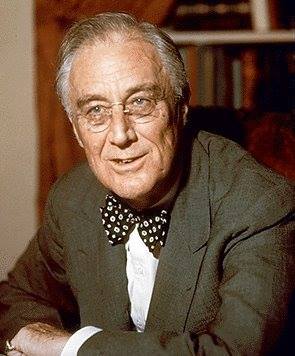 In a profound sense, it is a women’s war. It is a women’s war, first, because we have never before faced an enemy whose pronounced policy has been the degradation of womanhood, whose ultimate design is to build a world where women everywhere will be slaves.

In shops and offices, in factories and farms, women are doing men’s jobs, that men may be free to do the supreme job of beating the Axis. Women have played heroic roles in every crisis of our history, but no other crisis has so deeply threatened their freedom, or so urgently demanded their strength.

His remarks, a well-deserved tribute to the women of America who are now doing vast amounts of defense work as well as serving in uniform, received an enthusiastic response from the audience, composed of Daughters of the American Revolution members, now meeting in Cincinnati, Ohio.