April 22, 1919: Pennsylvania suffragists have never lacked determination and today their persistence paid off, as the House passed a bill – by an almost two-to-one margin – to put a suffrage referendum on the State ballot in 1921.

“Votes for Women” advocates in the Keystone State never gave up after the 1915 suffrage referendum went down to defeat along with referenda in three other big Eastern States that fall. They have been hard at work ever since and have greatly increased the public’s support for equal suffrage in Pennsylvania, so once the Senate has passed the bill and the Governor has signed it, the referendum is expected to easily pass.

But the proposed Pennsylvania Suffrage Referendum of 1921 is just one small part of the reason why optimism abounds among suffragists. Just yesterday, Iowa became the eighth State in three months whose legislatures have passed bills enabling women to vote for President. Though only partial victories, in that women do not yet have full voting rights in these newly-won States, the fact that women can now vote for President in 27 of the 48 states, which have a combined total of 302 Electoral Votes out of the 531 which will be cast, means that regardless of whether the Susan B. Anthony (nationwide woman suffrage) Amendment is passed and ratified before the 1920 election, women’s votes will be critical to Presidential candidates in the next – and all future – elections. 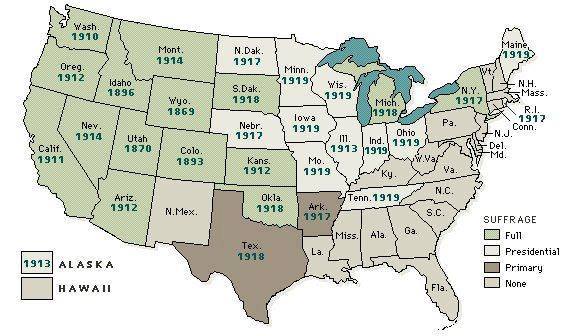 There are now about 15,000,000 women eligible to vote for the next President – a number just 2,000,000 less than the total number of votes actually cast for the two major party candidates in the 1916 Presidential election. The West has only one State – New Mexico – where women cannot vote for President and even the “Solid South” has cracked a bit, as Tennessee women will be able to help elect the nation’s next Chief Executive.

The 66th Congress will be back in session on May 19th and it is expected that the House will once again pass the Anthony Amendment, doing so by a comfortable margin and almost immediately. Polls from various suffrage groups show uncertainty over whether there are precisely enough votes in the Senate, or whether one vote is still lacking for the required 2/3 majority. But the sudden rush of support for Presidential suffrage by the legislatures of so many States can only add to the pressure on Senators to vote for the Anthony Amendment. Then it’s on to the States, where 36 of 48 are required to ratify. Though there is no deadline for ratification (a restriction unique to the 18th Amendment so far), every effort will be made to achieve victory in time for women to register for the 1920 election.