May 19, 1969: In what seemed like a courtroom scene from another era, Bill Baird was sentenced to three months in prison today for distributing a contraceptive device to an unmarried woman in violation of a Massachusetts law banning “Crimes Against Chastity, Morality, Decency and Good Order.”

The maximum penalty for violation of that law is five years in prison. 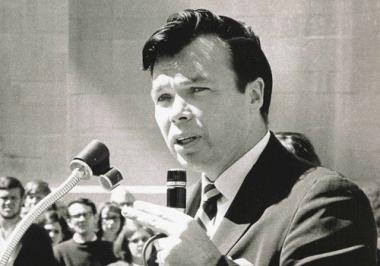 The case began on April 6, 1967, when in response to a request by some students, Baird came to Boston University and gave a well-attended lecture on birth control. At the conclusion of his remarks, he gave a package of Emko contraceptive foam to a 19-year-old female student. He was promptly arrested by members of Boston’s Vice Squad, and charged with two separate felonies: exhibiting “obscene” objects (birth control devices) and giving away one of them.

Baird was found guilty on October 17, 1967, though his sentencing was stayed until he could appeal to the Massachusetts Supreme Court. He won a partial victory there 18 days ago, when the Court ruled in “Commonwealth v. William R. Baird” (355 Mass. 746) that it was not illegal to give a lecture on birth control, even if it involves exhibiting contraceptive devices. But the justices voted 4 to 3 to uphold his conviction for distributing any such device to an unmarried individual.

The state’s total ban on birth control, on the books since 1879, was replaced in 1966 by a new statute which allowed physicians and pharmacists to dispense contraceptives – but only to those who were married and over 21.

Though many in the courtroom today had expected nothing more than a symbolic $100 fine to be imposed, the judge declared that Baird was a “menace to society” and sentenced him to three months in the infamous Charles Street Jail. Baird is angry, but prepared to serve his time while appealing his case to the U.S. Supreme Court. Four years ago the Court ruled in “Griswold v. Connecticut” (381 U.S. 479) that married couples have a right to birth control, but has not yet ruled on whether single individuals have that same right, so this will be a test case.

UPDATE: Baird began serving his sentence on February 20, 1970. The U.S. Supreme Court did eventually take the case, and on March 22, 1972, ruled in “Eisenstadt v. Baird” (405 U.S. 438) that unmarried individuals have the same right to birth control information and devices as married couples. This landmark decision overturned laws in 26 states.