January 29, 1917: Three thousand people cheered Margaret Sanger’s speech earlier tonight at Carnegie Hall, as she called for the repeal or overturning of Section 1142 of the New York State Penal Code and all similar statutes. 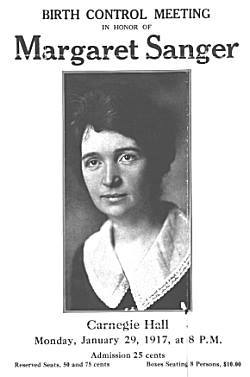 This law makes it a criminal offense for anyone to sell or give away contraceptives – or even information about birth control. The audience also expressed its support for Ethel Byrne, who is being force-fed after engaging in a four-and-a-half day hunger strike in the Workhouse on Blackwell’s Island. She is serving a 30-day sentence for the “crime” of distributing birth control information.

Sanger was able to attend tonight’s meeting despite having been on trial today on the same charges as her sister, Ethel Byrne. The three-judge panel has not rendered a verdict yet, and therefore has not imposed the expected sentence.

Sanger’s trial opened with testimony from the female police officer who arrested her on October 26th, ten days after she, Byrne and Fania Mindell opened the nation’s first birth control clinic. Officer Margaret Whitehurst had been to the clinic before, in an undercover role, to gather evidence. Whitehurst said that when she entered the clinic on the 26th, she observed Sanger sitting in a back room with an open box of Aseptikon Vaginal Suppositories on the table. Sanger was talking to three women on the other side of the table. After putting down the Aseptikon, Sanger picked up two rubber birth control devices, one for men and one for women, and continued talking.

Officer Whitehurst said that at this point, she and two male officers placed Sanger under arrest, and after interrogating the three other women, took Sanger to the station house in a patrol wagon. After more witness testimony and lengthy arguments from Assistant District Attorney Edward Cooper and defense lawyer Jonah Goldstein, Presiding Judge Freschi said: “This is a very close case. The court will reserve decision and ask both sides to submit briefs.”

At the Carnegie Hall rally earlier this evening, Sanger left no doubt about her goal of repealing Section 1142 of New York State law and the Federal Comstock Act, both of which classify birth control devices and information on their use as obscenity:

I come to you tonight from a crowded courtroom, from a vortex of persecution. I come not from the stake at Salem, where women were burned for blasphemy, but from the shadow of Blackwell’s Island, where women are tortured for ‘obscenity …’ My purpose in life is to arouse sentiment for the repeal of the law, State and Federal. It is we women who have paid for the folly of this law, and it is up to us to repeal it.

The audience members enthusiastically passed a number of resolutions by acclimation. They condemned the denial of a jury trial to Sanger and the refusal of the judge to stay Byrne’s sentence while her conviction is being appealed. They also expressed sympathy for Byrne, and protested her being denied visitors by Commissioner of Correction Lewis. Finally, they pledged to “secure such change in State and Federal laws as shall put birth control knowledge within the reach of all who need it” and “unwavering moral and financial support” to Margaret Sanger “in her campaign to establish the principle of voluntary motherhood in this country.”

The evening was a great success, with the proceeds from the 25-cent to 75-cent seats, as well as the $10 boxes going to help the campaign to decriminalize birth control. To the surprise of many, sales of the first issue of Sanger’s “Birth Control Review,” which contains articles from such noted individuals as H.G. Wells and Havelock Ellis, advocating legalization of birth control, were not blocked by the police, and numerous copies were sold at 15 cents each.

But while spirits were high at Carnegie Hall, Ethel Byrne is still unjustly imprisoned in the grim surroundings of the Workhouse. She continues to refuse to take food voluntarily, and is still being force-fed, though now only twice a day instead of three times.

One incident in her continuing ordeal exemplifies her character. When physicians offered Byrne the opportunity to take two pints of nourishment from a glass instead of a rubber tube inserted down her throat and into her esophagus, and assured her that “nobody would know,” she refused, saying: “Nobody else might know about it, but I would, and I would not be following out the course I have laid down.” Even Burdette Lewis, the Commissioner of Correction, had to admit that “she appears to be a very conscientious woman.”

The battle is far from over, but it has certainly reached a new stage. And thanks to the courage and determination of women and men like those here tonight, the fight for birth control will continue in public forums, courtrooms, prisons, State legislatures, and Congress until victory is achieved.