March 3, 1913: Any doubts about the courage, dedication, or organizational skills of suffragists that may have existed in the minds of some a few hours ago must certainly lie discarded along Pennsylvania Avenue in Washington, D.C, tonight.

Had today’s massive suffrage parade and pageant been done on a quiet street and with ample police protection, it would still have been an incredible feat. But when the National American Woman Suffrage Association and the event’s chief organizers, Alice Paul and Lucy Burns, successfully pulled off today’s spectacle with almost every imaginable obstacle thrown in their way, they furnished undeniable proof that the late Susan B. Anthony was right when she predicted that “failure is impossible” for woman suffrage.

Somewhere between six and eight thousand costumed marchers representing all 48 States, accompanied by 26 floats, 10 bands, 6 golden chariots and numerous women on horseback, gathered together today to support the cause of “Votes for Women.” 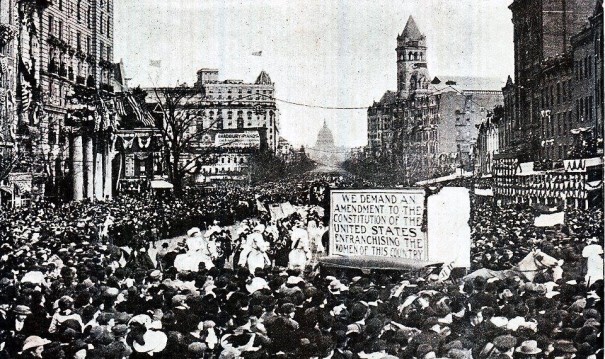 The march began at the Peace Monument, and was led by two equestrians: Inez Milholland, the Herald and Mary Jane Walker Burleson, the Grand Marshal. But when the marchers turned down Pennsylvania Avenue, an unruly mob was encountered. The marchers pushed their way, foot by foot toward the Treasury Building amid a raucous crowd of over 500,000, many drawn to the city for President-elect Wilson’s inauguration tomorrow. So great was the battle that at one point it took three hours to advance just one mile.

At times, for as far as the eye could see, there was nothing but a solid mass of people between the buildings lining the sides of Pennsylvania Avenue. The few police who had been assigned to control the crowd either had no interest in doing their duty or knew they were hopelessly outnumbered and simply gave up trying to protect the marchers from aggressive harassment by the disorderly throng. But the suffragists kept calm, and like a well-disciplined army, steadily marched forward.

The parade itself was an organizational triumph, with separate sections vividly illustrating each point suffrage advocates wished to make. “Women of the World, Unite” was the banner that led women representing countries where they have equal suffrage. Another section saluted the progress women have made in the U.S. over seven decades. A thousand college women paraded together under their school banners, while other contingents represented women in various organizations and occupations.

There were clubwomen, clergywomen, State delegations and pro-suffrage Members of Congress in the line of march as well. And even amid the heckling and disruptions, there was some cheering, with the biggest ovation of the day going to General Rosalie Jones and her suffragist Army of the Hudson that hiked here from Newark, New Jersey, to be in today’s parade.

But the parade was only one part of the spectacle. At the other end of the marchers’ route, a colorful pageant was taking place on the steps of the Treasury Building. While their sisters fought rowdy crowds, the performers’ courage was tested battling the cold weather in their thin costumes worn for an allegory about women striving for equality through the ages. Because the parade was held up for so long, they had to spend time after their well-applauded finale shivering in the frigid weather waiting for the long-delayed marchers to arrive.

Finally, near the end of the parade route, the 15th Cavalry came charging in from Fort Myer to do the job the police should have been doing all along. They cleared the street for the marchers by riding directly toward the hecklers at full gallop, causing them to scramble for the safety of the sidewalk with more speed that might be thought possible from drunken hooligans.

After the last of the marchers completed the route, two thousand suffrage supporters filled Continental Hall to share their experiences and feelings about this historic day. Certainly there was indignation and anger expressed at the police, but there was also justifiable pride in the conduct of the march’s participants.

Reverend Anna Howard Shaw, who has been President of the National American Woman Suffrage Association since 1904 said:

I was never so proud in all my life. I never was so thankful to be one of your members. I have never seen greater dignity under trying conditions; greater coolness under insult and oppression than was displayed by the marchers for suffrage today.

The battle for the ballot is far from over, but these seasoned veterans will now return to work in their home States, secure in the knowledge that they have presented their case to a nationwide audience in the most positive and persuasive manner possible and that they can overcome any challenge that may be encountered in the future.