April 27, 1904: A victory today for female teachers who wish to marry, and for women’s rights in general.

The New York Board of Education has just voted to reinstate Jennie Patterson Vandewater after she was dismissed from her teaching position at P.S. 58 in Queens, on December 23rd, as a result of her marriage. The Board concluded it is now useless to try to enforce its prohibition on married women teachers due to a recent Court of Appeals decision (Murphy v. Maxwell, 177 N.Y. 494) and growing public opposition to the rule.

The regulation read: “No woman Principal, head of department, or member of the teaching or supervising staff shall marry while in the employ of the Board of Education, which may direct that charges be preferred against such teacher by reason of such marriage.” Though the portion of the rule authorizing charges to be brought has been stricken, the part prohibiting marriage by women teachers remains on the books. 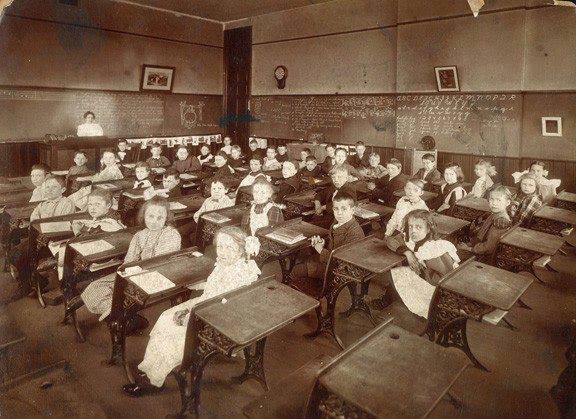 But M. Dwight Collier, a member of the Committee on Elementary Schools said: “We will take no action against such women teachers as marry. We are tired of fighting over this matter in the courts and the public is in favor of retaining married teachers.” However, he warned: “I think our action will lead to scandal. I think that the public will regret that married teachers are permitted to teach.”

Interestingly, the Court of Appeals decision was not a rejection of the old-fashioned attitudes behind the ban itself. The problem as they saw it was that Section 1117 of the Greater New York Charter provides that teachers may only be dismissed for specific reasons: gross misconduct, insubordination, neglect of duty, or general inefficiency. Since marriage is not included, the judges ruled that this cannot be the sole reason for dismissal.

A lower court believed that a ban on married women teachers was both valid and justified. One judge opined that the duties of wife and mother were so extensive that they could not help but interfere with those of a teacher. Another judge said of a woman: “While single, her services belong to herself. When married, they belong to her husband,” so therefore a married woman could not complain about being unable to make a contract for her services with the School Board because she had chosen to make herself ineligible to make such a contract.

The practice of firing or refusing to hire married female teachers is of great concern to many women’s groups, prominent among them the New York Legislative League. At a meeting on December 3rd, presided over by Lillie Devereux Blake, the League passed the following resolution in support of Vandewater:

Resolved: That we would respectfully remind the Board of Education that it nowhere appears in any section of the Criminal Code that it is a crime to be a woman, nor do any of the statutes enact that is reprehensible or in violation of any law for a woman to marry, and:

Resolved, That in view of these facts we protest against the attempt on the part of the Board of Education to force out of the service of the schools an admirable teacher, as a violation of all the rules of common sense, as well as an encroachment on the right of a citizen to earn an honest living and do a valuable work; and

Resolved, That we urge the Board of Education to continue the aforesaid teacher in her position and to pay her arrears of salary which have been unjustly withheld from her.

Though a good deal of prejudice against women in the workforce still remains – especially against married women in the teaching profession – today marks a meaningful advance toward equal opportunity and bodes well for unprecedented progress in this new century.