April 20, 1912: There is great excitement and activity today at two New York City suffrage offices, as the day of the big parade approaches.

May 4th is just two weeks away, so there is still a lot of work that needs to be done before anywhere from 10,000 to 15,000 marchers take to the streets for the largest and most elaborate woman suffrage pageant ever presented. 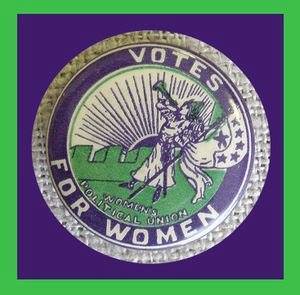 Suffrage parades began four years ago, when about two dozen brave members of the Progressive Woman Suffrage Union defied custom – and police – by marching a few blocks up Broadway on February 16, 1908. In 1910 the idea was tried again, with the number of marchers increased to four hundred. Last year the rapid growth continued and three thousand stepped off.

Thanks to the annual repetition, favorable publicity and official city permission making the idea seem less radical, more and more people and organizations are now taking part. The victory in California on October 10th, when it became the sixth and by far the largest equal suffrage State has also helped to re-energize the suffrage movement, so there’s really no telling how large this year’s parade may actually turn out to be.

Today the Women’s Political Union was not only open – unusual for a Saturday afternoon – but packed with women in white suits, tri-color sashes and the new 39-cent “Votes for Women” parade hats they will all be wearing. Well, almost all. Harriot Stanton Blatch, president of Vassar’s Class of 1878, W.P.U. President and daughter of Elizabeth Cady Stanton, will be wearing a mortar board and college gown when she leads the parade. A few other officers will be dressed in the same manner.

Meanwhile, at the Woman Suffrage Party’s new headquarters, up to 50 women have been hard at work making large “five dollar banners” for thirty-seven and a half cents. Sixty-three banners are in production, one for each Assembly District in the city. Large black letters are being cut out, then sewn on to “suffrage yellow” banners.

Today’s work commenced very early this morning and only now, at 6 p.m., does it seem to be finishing up. The W.S.P.’s new and much bigger headquarters certainly comes in handy for occasions like this and each of the seven rooms and ten closets is being fully utilized.

As the date of the parade gets closer, volunteers are especially needed by the Women’s Political Union, 46 East 29th Street (Telephone: Madison Square 9880), and the Woman Suffrage Party, 30 East 34th Street, so drop in if you can. There is a wonderfully friendly, optimistic atmosphere in both locations and if the parade gets the kind of unprecedented turnout that’s hoped for, volunteers can not only say that they marched, but that they had the opportunity to meet many well-known suffrage leaders and did some of the hard work that helped make this landmark event such a success.